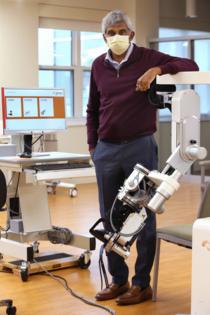 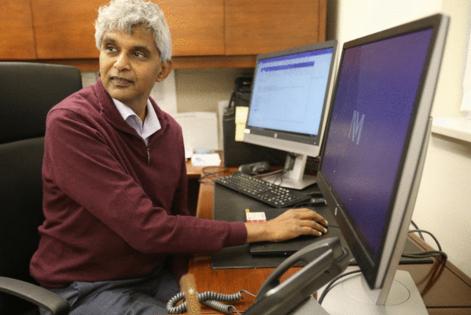 CHICAGO — As a medical provider, Dr. Mahesh Ramachandran encouraged his patients to keep working as hard as they could in physical therapy, knowing that more effort could yield more results.

But then, he became a patient himself. And it left him with a new appreciation for the neurological work the patients put in every day as part of their rehabilitation.

Ramachandran, the chief medical officer of Marianjoy Rehabilitation Hospital in Wheaton, Illinois, landed in recovery there after suffering a stroke over Memorial Day weekend.

It caused weakness to his left side, leaving him in need of therapy to help relearn things like getting dressed. “I had a very hard time buttoning a shirt, putting on a belt,” he said. “Tying shoelaces were pretty much impossible for me to do on my own. Day-to-day simple things like that, because you use both your hands for those tasks.”

After stumbling in his backyard in May and feeling a bit confused, Ramachandran went inside. About half an hour later, he noticed his left arm felt weak. He grew alarmed and asked his wife to call 911.

As a stroke specialist, he knows what feeling weak on one side could mean. And he also knew that speed mattered; by getting to the hospital quickly, he was able to be diagnosed and begin care.

Doctors told him he’d had a stroke on the right side of his brain. “Fortunately, it didn’t affect my speech, my cognition,” Ramachandran said.

But he still had a journey ahead.

He hoped to do outpatient therapy, coming to Marianjoy for appointments and sleeping at home. But it quickly became clear he would need to stay at the hospital, as he had difficulties walking and worried about his wife needing to lift and carry him at home.

Coming in as a patient through the doors of Marianjoy he’d so often entered as chief medical officer “was a completely different perspective,” he said.