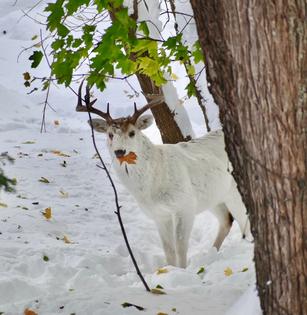 (UPI) Wildlife officials in New York said a white deer caught on camera in West Seneca "appears to be a leucistic white-tailed deer."

The West Seneca Police Department posted photos to Facebook showing what the department theorized to be a "Seneca white deer."

"They maybe just got confused by our local highway signs for 'West Seneca' and took the wrong exit," the post said.

TJ Pignataro of the New York State Department of Environmental Conservation told WKBW-TV the animal "appears to be a leucistic white-tailed deer."

"Leucism, where there are white patches, or in some cases all white fur, is a rare condition. True albinism, where the animal completely lacks pigment, even in the eyes, is even more rare than leucism. The deer in the photo is not an albino deer," Pignataro said.

(UPI) A pair of producers for Live with Kelly and Ryan succeeded where the hosts failed and broke a Guinness World Record for donning the most sweaters in 30 seconds.

The hosts of the ABC talk show, Kelly Ripa and Ryan ...Read More

(UPI) A snake catcher in Queensland, Australia, responded to a home to help with an unusual situation -- a 4-foot snake in the toilet.

(UPI) A Japanese YouTuber created a custom setup to allow his pet fish to play Pokémon on his Nintendo Switch, but a malfunction led to the fish spending money at the eShop and revealing its owner's credit card ...Read More

(UPI) Officials with the San Diego Zoo said it is seeking Guinness World Records recognition for a Pacific pocket mouse believed to be the oldest in the world at the age of 9.

(UPI) Jace Tunnell, reserve director for the University of Texas Marine Science Institute, said the massive eel was found washed up on on a beach at Mission-Aransas Reserve.

Tunnell says in his video, posted to the ...Read More