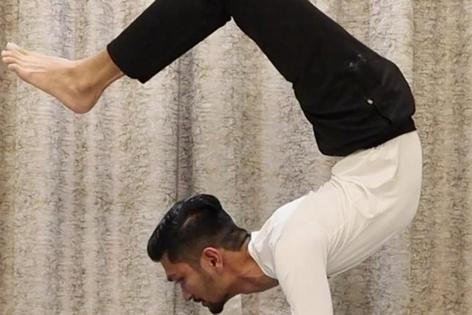 (UPI) A yoga instructor in India broke a Guinness World Record by holding the difficult scorpion pose for 29 minutes and 4 seconds.

Yash Moradiya, 22, a Dubai native living in India, said he took on the record for longest time to hold the scorpion position as a means of raising awareness of the benefits of yoga.

"The scorpion position, particularly, is all about stability. The longer we hold the pose, the better we learn to establish the mental resilience to survive any critical situation we face in life with grace," Moradiya told the Khaleej Times. Yoga has the ability to transform our physical and mental well-being, driving us to unlock our hidden potential of our bodies away from limiting thoughts.

Moradiya, who has been practicing yoga since he was 8 years old, said he has been working on his endurance in the scorpion position for five years.

He successfully held the position for 29 minutes and 4 seconds, handily defeating the previous record of 4 minutes and 47 seconds.