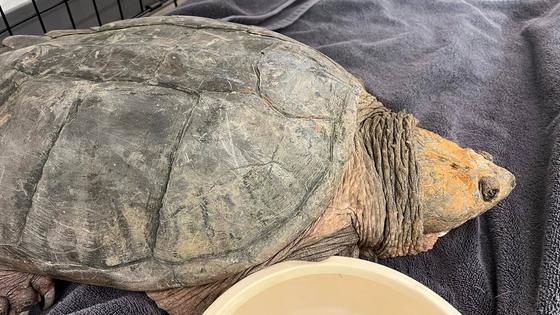 (UPI) Animal rescuers in Baltimore said they were left scratching their heads when a massive snapping turtle was found wandering in a gutter.

Baltimore Animal Rescue and Care Shelter said the large snapping turtle was found Monday morning near Cherry Hill Park, during a time of year when the local snapping turtles are hibernating underwater.

"Some mysteries in life may never be solved. Like, are we alone in the universe? Which came first: the chicken or the egg? And, most importantly, how did this snapping turtle friend end up roaming around Baltimore City?!" BARCS said in a Facebook post.

The snapping turtle is now "safe from the elements and will get the care he needs," the post said.

BARCS said the snapping turtle would be transferred to a wildlife specialist and eventually returned to the wild.

(UPI) SeaWorld Rescue in San Diego said a sea lion that made headlines for blocking a freeway in January is undergoing a behavior analysis after being rescued from a storm drain.

(UPI) Animal rescuers came to the assistance of a stuck hedgehog found trapped in a goalpost hole on a soccer field.

The RSPCA said some teenagers playing on the field at Scotswood Social Club in Newcastle, England, ...Read More

(UPI) An Idaho man broke a Guinness World Record by running a half marathon while wearing 111 T-shirts.

David Rush, who has broken more than 200 Guinness World Records to promote STEM education, said it took about 25 ...Read More

(UPI) A coordinated Colombian 19-year-old broke his own world record by solving three Rubik's cubes in 4 minutes, 31.01 seconds -- while juggling them.

(UPI) National Piercing Day, celebrated annually on May 16, was started by a website in 2007 to celebrate body piercings of all types.

The holiday was founded in 2007 by GoofyAuctions.com, a now-defunct website that ...Read More