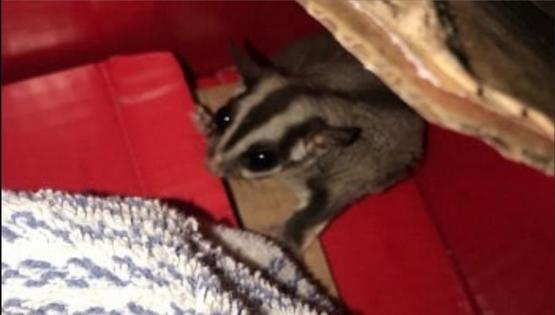 (UPI) A London man said he was awakened in the early morning when a sugar glider flew through an open window into his sixth-floor apartment.

"I was asleep and woke up to the noise of something running around the bedroom. I was scared it might be a rat, but when I went to investigate, I found this little creature," Zou told the RSPCA. I didn't know it was a sugar glider, so I sent photos to some friends and they helped me to identify it.

Zou kept the sugar glider, a type of Australian possum that can glide through the air, in his bedroom.

"I left the window open to the balcony, so he must have come in from outside. I guesss he's someone's pet and flew into my flat from theirs," Zou said.

"I put some messages through the letterboxes of my neighbors, but wasn't able to find his owner so he could have come from further afield," he said.

Zou contacted the RSPCA, and Inspector Francesca Tambini responded to his apartment in the Leather Lane area of London.

"Sugar gliders look incredibly cute and this little guy is adorable," Tambini said. It's easy to see why people might be tempted to buy them as pets, but we would urge them to reconsider. These animals need very special care, and we don't believe they are suitable as pets.

She said the sugar glider most likely was an escaped or abandoned pet.

"Unfortunately, we do see these sorts of animals being abandoned from time-to-time when their owners realize how difficult it is to meet their needs in a household environment," she said.

The sugar glider was placed in the care of an animal specialist in Cambridgeshire who has experience with the species.

(UPI) A Michigan woman found listening to her mother to be a profitable choice when it led to her winning a $1,682,998 lottery jackpot.

(UPI) A Florida police officer used a pole and a knife to rescue a dolphin spotted entangled in a fishing net in Biscayne Bay.

(UPI) A British service dog charity said officials were shocked when a German shepherd gave birth to a litter of 16 puppies.

(UPI) A giant, spinning ice disk formed on a Maine river where the phenomenon has been spotted before -- and subsequently froze in place.

Residents of Westbrook said the ice disk, which first formed in the Presumpscot ...Read More

(UPI) Passengers on a London Underground train were shocked to come face-to-face with an unusual straphanger -- a tarantula.

The RSPCA said commuters spotted the tarantula in a plastic tub on a train that arrived at the ...Read More

(UPI) A New Zealand man who initially thought he had water trapped in his ear said the true cause of the blockage turned out to be something far more shocking -- a live cockroach.