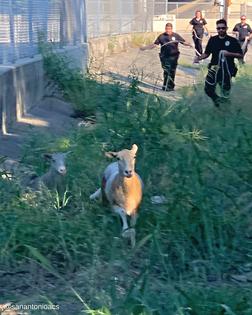 (UPI) A pair of sheep got loose from their pen in Texas and led animal care officers on a foot chase that at one point ended up on a busy highway.

The city of San Antonio Animal Care Services said in a Facebook post that officers responded multiple calls Sunday about two loose sheep grazing in a field next to the Texas 151 highway.

The post said the sheep became "spooked" when the officers approached them and fled toward an access road. The officers were able to form human walls to guide the sheep away from the road, but the animals hopped over a nearby retaining wall and ended up on the highway.

The San Antonio Police Department blocked westbound traffic on the highway to allow the animal care officers to guide the sheep out of the roadway.

"After a little more coaxing, our would be shepherds corralled the sheep in our fenced courtyard," animal services said.

The post said the sheep were reunited with their owners and were not showing any signs of injury or stress from their time on the loose.

(UPI) A North Carolina truck driver on his way to California found his choice of route to be especially profitable when he won a $1 million lottery jackpot in Tennessee.

(UPI) A Manitoba, Canada, athlete broke a Guinness World Record when he lifted a total of nearly 13,000 pounds over one hour while doing Turkish get-ups.

(UPI) A man who found a 1948 high school class ring while exploring with his metal detector was able to return the ring to the family of the man who lost it 73 years earlier.

(UPI) A New York art collective announced it will be selling 1,000 Andy Warhol sketches for $250 each -- but 999 of them are elaborate forgeries.

(UPI) A group of boaters journeying about a mile off the Florida coast ended up rescuing a lost dog they spotted swimming aimlessly in the ocean.

Bryn Crowell said she and her friends were out on Jakob Dutiot's boat ...Read More

(UPI) A Colorado search and rescue team said a hiker lost on a mountain trail for about 24 hours didn't answer phone calls from the team because they assumed the calls were spam.