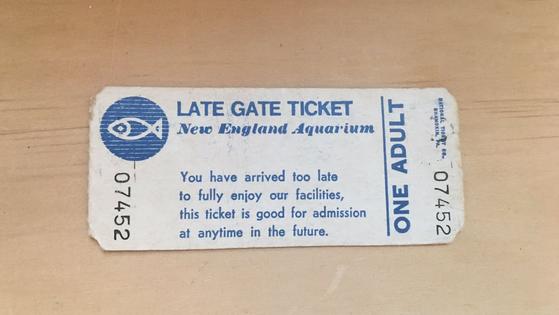 (UPI) A visitor to Boston's New England Aquarium was allowed to enter the facility for free using a ticket that was issued in 1983.

Rachel Carle, who is in Boston attending college, said her great-aunt gifted her two New England Aquarium tickets that had been in her wallet for nearly four decades.

The tickets, issued in 1983, were known as "late gate" tickets and were issued to guests who arrived too late in the day to get the full aquarium experience and promised a free make-up visit.

The aquarium stopped issuing the tickets about 25 years ago, but Carle visited the facility June 11 and staff agreed to honor the ticket she presented.

"I walked up to the ticket office and explained the story of the ticket," Carle told CNN Travel. They took a look at the ticket, laughed, and said 'well, it says come back any time! There's no expiration date!'

Carle said she did not expect the aquarium to honor the 38-year-old ticket.

"I didn't know what to expect! I promised my great aunt Kit I would try; whether they honored it or not, she and I would have been glad just to see the story through. We're so glad they honored it!"

Carle said aquarium staff told her they were considering hanging the ticket on the wall as a keepsake. She said she plans to do the same with the other ticket her aunt gave her.

Admission to the aquarium is currently priced at $32 for an adult.

(UPI) A North Carolina man who tried his luck at the Carolina Keno lottery game won $100,000 -- his second-largest lottery prize in seven years.

The Plattsburgh Police Department said officers were called to an intersection at which a resident ...Read More

(UPI) Virginia health officials and insect experts are trying to determine the origins of mysterious bug bites being reported by residents of one county.

Locals in Arlington County said they have received what initially ...Read More

(UPI) A metal detecting hobbyist and the owner of a matchmaking company in New York reunited a man with the high school class ring he lost 46 years earlier.

(UPI) A Texas police department shared body camera footage from the capture of an alligator found "swimming naked" in a hot tub without regard to the owner's wishes.

The Fulshear Police Department said in a ...Read More