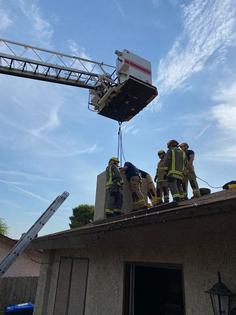 (UPI) Firefighters in Nevada conducted an unusual rescue when a teenager who found herself locked out of her home tried to climb down through the chimney and became stuck.

The Henderson Fire Department said in a Facebook post that the 18-year-old found herself locked out of her single-story home and attempted to climb in through the chimney.

The girl "got stuck just above the flue," the department said.

The firefighters used a rope system to pull the teenager to safety in a rescue that took about 30 minutes. The department said she was not injured.