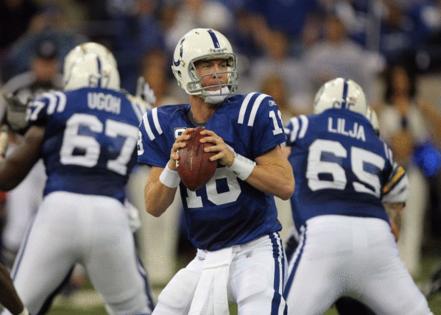 Everyone loves an underdog.

And when these underrated champions emerge, they offer often-tortured fans long-awaited senses of validation, pride, and even extreme empathy.

Every team in the NFL races towards the Super Bowl, trying to win as many games as possible in order to secure home games in the playoffs. Home fans can rattle opponents, they can make a kicker’s leg turn to jelly, and they can force a quarterback’s snap count to disappear in an overwhelming din. But whether home or away, every once in a while an underdog team will come in and feed off the negative energy. They use every slight, every perceived disadvantage, and the long odds against them as fuel to drive their adrenaline rush towards the endzone. These teams thrive under the pressure and live for hearing 50,000 fans go silent with fear.

To find the biggest upsets in NFL Playoffshistory, BestOdds analyzed data from Sports Odds History from the 1966 season to present day.

Of course, some teams never make it to the big game and are perpetually playing on an opposing team’s turf. But every once in a while, these teams will overcome the longest odds to pull off a mini-miracle and give overconfident home-team fans a nightmare they’ll never forget. 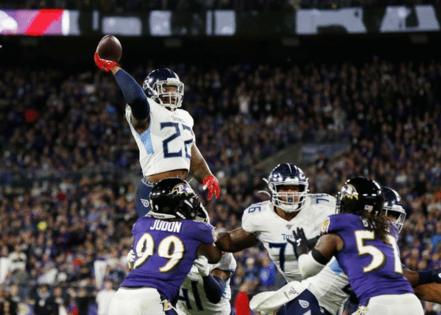 The 2019 NFL season was dominated by the Baltimore Ravens. They finished the year with the best record, going 14-2, and the team's quarterback Lamar Jackson was the league MVP. The team was so dominant it also set the NFL record for most rushing yards in a season.

Coming into the AFC Divisional playoff game, the Ravens were the prohibitive favorite over Tennessee and had home-field advantage. The problem for the Ravens was they just couldn’t stop Derrick Henry, who led the NFL in rushing that year. Henry got off to a fast start and never looked back, running for 195 yards and even throwing a touchdown pass. Although the Titans were the underdog, they had beaten the defending Super Bowl champion New England Patriots the week before, so it wasn’t a complete shock. But after taking out the Ravens, the team succumbed to the eventual Super Bowl winner, the Kansas City Chiefs, with the team's own playmaking superstar, Patrick Mahomes. 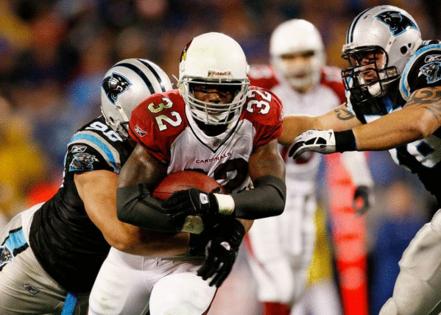 Quarterback Kurt Warner was at the tail end of his career in 2008, but he had a little more magic in his 37-year-old arm and a secret weapon in young receiver Larry Fitzgerald. Coming into the playoffs, the Cardinals were division winners, but their record was an unimpressive 9-7. Coming into the game against Carolina, they weren’t just an underdog, they were playing against a team that went 8-0 that year at home. On top of that, the Cardinals hadn’t won a game all year in the Eastern time zone.

But none of that mattered on this particular Saturday as Warner threw for 220 yards, 166 of them to Larry Fitzgerald. On the other side of the ball, Panthers QB Jake Delhomme tossed five interceptions that his team could never recover from. The Cardinals ended up going to the Super Bowl, where Warner fell short, losing to Ben Roethlisberger and the Pittsburgh Steelers. 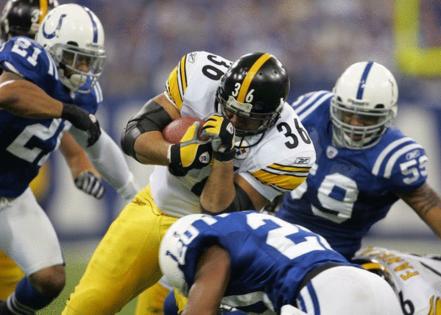 Coming into the 2005 NFL season, Peyton Manning was trying to shed the reputation that he was only a great regular-season quarterback. And when his Indianapolis Colts went 14-2 to notch the best record in the league, it seemed they were poised to get that monkey off Manning’s back. Earning a bye in the first round, the Colts faced the sixth-seeded Pittsburgh Steelers at home. The Steelers came out racing to start the game and were up 21-3 heading into the fourth quarter.

That’s when things got crazy.

The Colts scored 15 straight points during a succession of fumbles, interceptions, botched plays, and overturned calls. The Colts had a chance to tie the game with a field goal, but they missed, sending Manning home as a playoff loser once again. The Steelers were thefirst sixth seed to advance to a championship game and ultimately became the first sixth seed to win a Super Bowl that season. 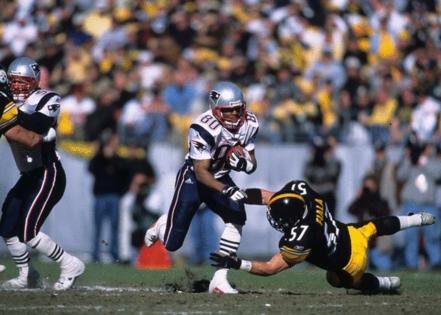 The beginning of any dynasty must start somewhere, and 2001 is when the New England Patriots got off to their historic run. The Patriots had a topsy-turvy season when starting quarterback Drew Bledsoe was hurt in Week 3 and was replaced by a fairly unknown Tom Brady.

Brady led the team to an 11-5 record and a divisional playoff win over the Oakland Raiders in the now-infamous “tuck rule game.” But heading into the AFC Championship, they had to play the top-rated Pittsburgh Steelers. The Pats were a double-digit underdog, and to make matters worse, Brady was hurt in the second quarter, so Bledsoe had to come back and replace him. The Patriots got off to a fast start and never looked back, though, planting the seeds for their first Super Bowl and the start of an unbelievable dynasty. 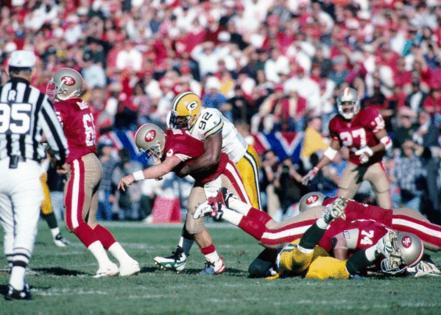 Even though the Green Bay Packers and San Francisco 49ers had the same regular-season record, the Niners were the defending Super Bowl champions and earned double-digit odds to win behind the strong arm of Steve Young. Little did the Niners fans know the legend of Brett Favre had yet to be written.

The Packers started the game by jumping all over the Niners and took a 21-0 lead. Favre threw for 299 yards and two touchdowns with no interceptions as he clinically took apart the Niners’ defense. On the Niners side, Steve Young earned a dubious record by attempting the most passes in NFL playoff history,throwing the ball a whopping 65 times. 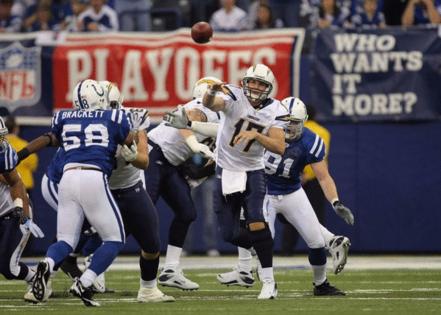 In 2006, Peyton Manning and the Indianapolis Colts finally won the Super Bowl and were poised and ready to repeat after finishing the regular season with a 13-3 record. Because of their dominance, they were a double-digit favorite when the San Diego Chargers came to town for the AFC Divisional playoff game.

After the first half, things seemed to be going Indy’s way. They were leading 10-7 and the Chargers’ best player, LaDainian Tomlinson, was taken out with a bruised knee. To make matters worse for San Diego, star quarterback Philip Rivers hurt his knee in the third quarter. But none of that seemed to matter as Chargers backupsBilly Volek (QB) and Michael Turner (RB) filled in with big play after big play to pull out the unlikely 28-24 win and send Manning home with another devastating playoff loss. 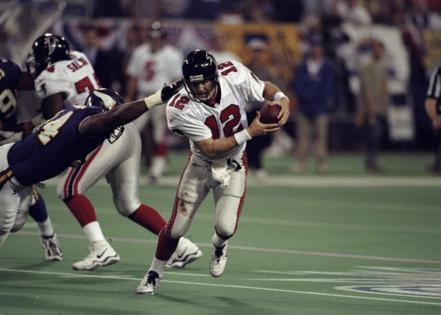 The Atlanta Falcons don’t have many playoff highlights as a franchise. They’ve been to the Super Bowl twice in their entire history and never won the big game. But in 1998, they came incredibly close when they beat the Minnesota Vikings in a contest that’s simply dubbed “The Kick.”

The Vikings were unbelievably dominant that year, going 15-1 in the regular season, and were heavy favorites to face the Denver Broncos in the Super Bowl. Leading 27-20, the Vikings had a chance to put the game away when their kicker Gary Anderson missed a pivotal field goal with about two minutes to play—his first miss in two years. The Falcons wound up tying the game, sending it into sudden-death overtime, when Morten Andersen (the Falcons kicker and no relation to Gary) nailed a 38-yarder to put the game away and earn the nickname, “The Kick.” 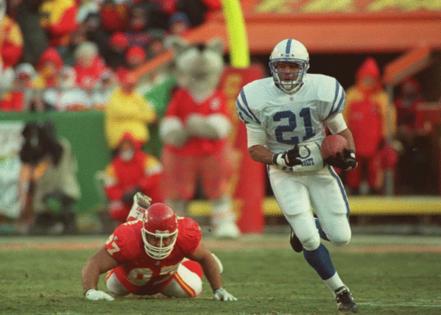 One of the biggest upset wins in NFL playoff history was also one of the lowest-scoring (and coldest) games. On Jan. 7, 1996, the Colts entered Arrowhead Stadium as a prohibitive underdog to the #1-ranked Chiefs. At the beginning of the contest, the temperature hovered around zero, setting up a bitter defensive battle.

The Chiefs went ahead early, but toward the end of the game, the Colts had jumped out to a 10-7 lead. The Chiefs’ kicker, Lin Elliott, usually as sure-footed of a kicker there is in the league, had already missed two field goals before the game-tying 42-yard attempt at the end. Elliott missed that kick as well, ending the Chiefs’ season and ending Elliott’s career as an NFL kicker. 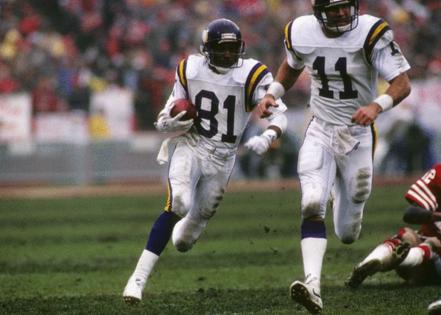 A strike shortened the 1987 NFL season, but it couldn’t stop the San Francisco 49ers from dominating league play. The team went 13-2, led by Hall of Famers Joe Montana and Jerry Rice, and coached by the legendary Bill Walsh. Heading into the NFC Divisional game, they were heavy favorites against a Vikings team that only went 8-7 during the season.

As good as Rice was, he was no match for the Vikings’ Anthony Carter on that day. Carter caught and ran for 227 receiving yards compared to Rice’s 16 yards. The Vikings wound up winning the game 36-24 in one of the biggest upsets of all time. Don’t feel bad for the 49ers though: They ended up winning the Super Bowl the next two years. 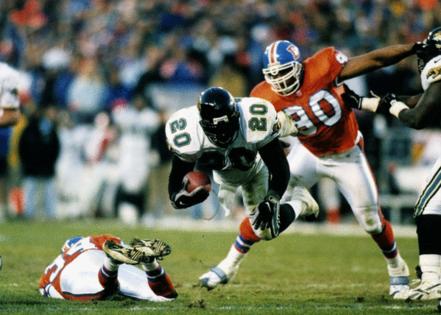 Denver Broncos quarterback John Elway was known for his unstoppable arm, but his teams always fell short in the biggest games as they never had a running back to help him out. That all changed in the 1996 NFL season when Elway had Terrell Davis backing him up.

In only his second year, Davis rushed for more than 1,500 yards and 13 touchdowns to help give the Broncos a 13-3 regular-season record and the #1 seed. The Jacksonville Jaguars, meanwhile, finished at just 9-7 and were a 14-point underdog going into the AFC Divisional game against the Broncos. While Elway and Davis held their own, it was the Broncos' defense that couldn’t get it together. Jags quarterback Mark Brunell torched the Broncos for 245 yards and two touchdowns, while their running back Natrone Means rushed for 140 yards and a touchdown as well.

The game goes down as the most lopsided road win in NFL playoff history (based on the odds) and another disappointing finish for Elway. Fortunately for Broncos fans, Elway recovered and helped the team win the Super Bowl the following two years.

This story originally appeared on BestOdds and was produced and distributed in partnership with Stacker Studio.

From computer automation taking on administrative tasks such as filing and invoicing to advances in artificial intelligence that streamline client intake and provide information on legal options, technology continues to ...Read More

As COVID-19 continues to spread, so too do legal complaints—from challenges to gathering in groups, to event cancellations, to businesses suing their insurers for coverage of lost income.

The coronavirus has exposed ...Read More