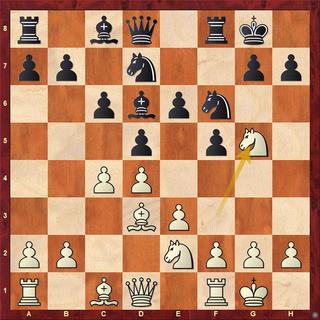 We’re going to do something for the next week that we’ve done once before: go through an entire game in stages. With puzzles you only get a snapshot of the end of the game. With this weeklong game you get to solve the decisions that had to be made to get to the final puzzle and concluding mating attack. Here were the first nine moves that arrived at our position-- 1.d4 f5 2.c4 Nf6 3.Nc3 e6 4.Nf3 d5 5.e3 c6 6.Bd3 Bd6 7.0–0 0–0 8.Ne2 Nbd7 9.Ng5. What should Black’s move be here?


The first decision should have been an easy one. Just win a pawn. White refused the bishop after 9…Bxh2+ because he didn’t want to experience 10.Kxh2 Ng4+ 11.Kg1 Qxg5 where Black would seem to get easy access to the white king. Next time out we’ll see what Black had in mind to pursue the attack.

It’s Mate in Two Monday. I might have saved this for a Weird Wednesday.

I’m sure everybody that reads this column can mate a lone king with a king and two rooks. Can you do it in three moves from this position?

This composition is amusing because Black gets more checks and ends up with more material, but still gets mated in six.

Black played one move here and White resigned. What was that move?

Two big hints on this one. First, it’s all knight moves except one. The one exception is on move 4. It’s worth a try in your head to try and control these knights. It’s more like a border collie rounding up a stray ...

This is a mating attack in an endgame. You should be able to logic it out considering the position of the black king and white king.