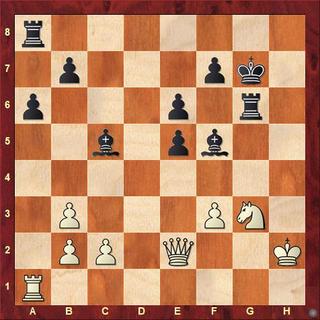 This is a fairly straightforward mating attack by Black. It had better be, because White is threatening to win with Qxe5+. It’s a great visualization test because it takes 9 moves.

White obviously, with his queen attacked twice, had better get busy. What’s the winning continuation here/

While reading Reti’s book of games by Golombek, I was reminded of this position that Reti commented on as not exciting him as much as a well-played game. OK, I get his point, but we patzers can still enjoy this finish!

Here we are at the final act of the game we have been following for a week. Black finishes up with a nice mating attack.

We’re going to do something for the next week that we’ve done once before: go through an entire game in stages. With puzzles you only get a snapshot of the end of the game. With this weeklong game you get to solve the ...Read More