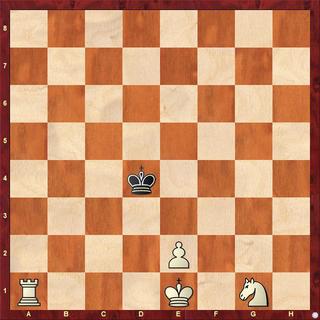 Another golden oldie to have some fun with. Great for kids, too. Your task is to put the chessmen you see along the bottome two rows on the board so they STALEMATE the black king on d4. To be clear, you don’t have to make moves with the pieces. Just pick them up and put them in a stalemate position on the black king, which does not move from d4. Remember a stalemate position is one where it would be black’s move, Black would not be in check, but everywhere he would try to go he would be in check.


With the black king on d4 you put the white king on d6, the white knight on d5, the white pawn on d3 and the white rook on d2. It’s a straight line!

This is a tricky mate in three, but once you figure out why you shouldn’t promote to a queen on a8, you’re well on your way.

This week will be old favorites week. They will be composed problems have very short solutions, as with today’s mate in two. Good luck

The Danish Gambit is a promise of exciting chess. White gives up material for a lead in development and Black tries very hard not to make a mistake in defense. In our position today, Black does make a critical mistake on ...Read More

Even though the calendar says summer isn’t for a few weeks yet, we’re going into summer mode with positions that will be fun and/or educational. If you know someone who’s a beginner, the problems in the coming week ...Read More