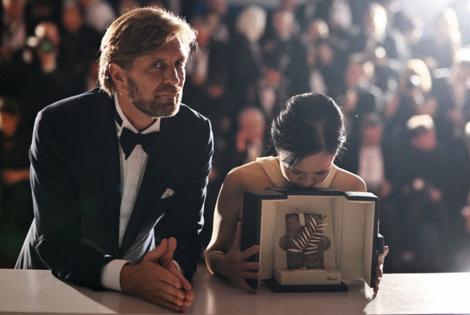 Challenges can reveal who people really are. That's as true of Abigail, the breakout character of Ruben Östlund's first English-language film, "Triangle of Sadness," as of the actress who plays her, 53-year-old Manila native Dolly de Leon.

Abigail is what Filipinos call an "OFW": an overseas Filipino worker, someone who takes work abroad, usually menial, often to send money home. She is a "toilet manager" on the opulent cruise ship in the story's middle chapter. Especially considering the film's now-infamous seasickness sequence, that's not the most delightful labor. Like many Filipinos, De Leon knows OFWs personally.

"I only put their nurturing side, taking care of other people" into the role, she says in this fancy — but cold — dining area in the back of a downtown L.A. hotel. "They're compliant and obedient and hardworking. If you ask them to do something, even if they think that it's not part of their job description, they'll go beyond.

"As far as the way she took over everything on the island, I think I took that from my mom. My mom was an OFW. She's very forceful and in control," she says of her mother, who died recently. "I think I got a bit of that from her subconsciously. But there was never a conscious effort to copy anyone that I knew."

In the third act, the ship sinks and the social order is upended as Abigail proves quite resourceful on an island with the other survivors.

"I don't really see Abigail in Part 2 and Part 3 as two different people. I think she's had that pent-up resentment for these people on that yacht from the start. She sees how they can't even take care of themselves. Everyone's been watching over them; they had no motivation to make their own cup of coffee," De Leon says. "So when Part 3 happens, it's not like a huge change happens in Abigail. I think a huge change happened around her, so she adjusted."

The actor may as well be talking about herself.

She grew up in the capital of the Philippines, her father a mechanical and electrical engineer, her mother mostly a housewife — "but she was also a champion bowler. Rosie de Leon. If people know bowling, they'll know her name."

Dolly caught the acting bug as a child and went to college for a degree in theater arts. For decades, she acted onstage, largely in classics such as "The Merchant of Venice," "Waiting for Godot" and "Three Sisters." The majority of her screen work, however, has been what she calls "little roles that you won't even remember."

She's being modest — she won a 2020 supporting actress prize at FAMAS (the Filipino Oscars) for "Verdict" — but hers is a familiar story of the struggling actor doing it for love: "You can't make a living out of acting, especially theater, in the Philippines. You have to do other stuff." The single mother of four worked as a facilitator: "I would facilitate in building corporate programs, organizational development, teach them presentation skills."