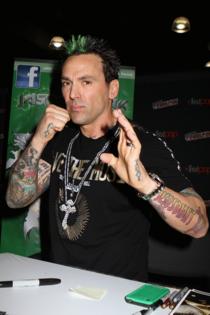 Jason David Frank, the “Mighty Morphin Power Rangers” star who died in Texas on Nov. 19, took his own life, his wife confirmed in an interview Wednesday. She also said they had reconciled in their 19-year marriage in the weeks before his death.

Tammie Frank told People she was speaking out because she has been “harassed online” since he died and could “no longer stand to watch my husband’s good name slandered.”

While it was widely reported that Tammie Frank had filed for divorce this summer, she clarified that about six weeks before Thanksgiving they decided to reconcile and were enjoying what was “meant to be a fun weekend getaway” for a country dancing event when her husband died.

"[W]e had called off our separation and were in the process of reuniting,” she said. “Don’t get me wrong, we had ups and downs and many troubles during our 19-year marriage, but this was an especially hard year for us.”

The sudden death last year of her daughter Shayla — whom Jason Frank helped her raise as his own — hit them especially hard, she said. They were raising her daughter’s son afterward, and the entire trauma “wrecked our family emotionally.” The Franks separated at that time, but recently a close family friend successfully encouraged them to get back together.

Tammie Frank also offered some details about what happened where they were staying during the country dancing event — the hotel where Jason David Frank died.

They got two rooms because Jason Frank snored, she said. They had danced that night and stayed at the hotel bar until it closed.

A noise complaint that came earlier in the evening was sparked by them having fun, not fighting, as TMZ had reported. Law enforcement sources told TMZ that the couple argued a second time and said Jason locked Tammie out of his room, details she disputed in the People interview.

“To help Jason relax and sober up before turning down to sleep, I went downstairs to get us snacks from the lobby,” Tammie Frank said. “I must’ve been gone no more than 10 minutes. I went back upstairs and began knocking on the door to no answer. I knocked repeatedly and kept calling for his name to open the door.”

She said she wasn’t sure who called police, but said authorities took her downstairs and then opened Jason Frank’s hotel room. He was found dead. She gave no details about his means of suicide.