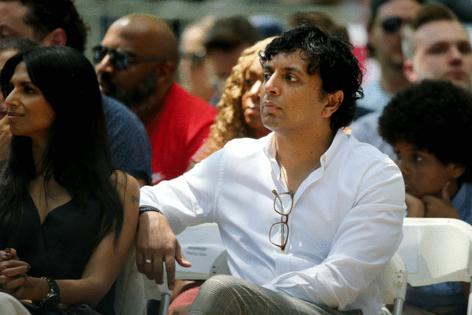 PHILADELPHIA — With HBO's Mare of Easttown and other big-budget productions taking most of Pennsylvania's film subsidies, small-budget independents felt left out. Few taxpayer subsidies were available for them. So they applauded over the summer when state lawmakers fattened the film tax credit pot by 43% to $100 million and set aside $5 million especially for Pennsylvania-based companies.

"We didn't want it all to go to one company," Rep. Stan Saylor the Republican head of the House Appropriations Committee, said of the $5 million tax credit, known as "the reserve."

"It was to be handed out to several small companies vs. big Hollywood studios that could tap into the other money," he said.

But Pennsylvania independent filmmakers have heard a chorus of rejections for tax credits as they learned that the entire $5 million was steered by a state agency to one of the state's big-time filmmakers, M. Night Shyamalan, whose company is based in Berwyn.

The Department of Community and Economic Development (DCED), which oversees the Pennsylvania film office, confirmed last week in an email that Shyamalan got the tax credit for "Knock at the Cabin," a film slated for release in 2023. The state agency said that the law failed to specify how many film-production firms should be awarded a tax credit — and thus it could go to a single firm, instead of the several Saylor envisioned when championing the law.

A big-budget film production leads to "a much larger impact on our economy," DCED's press office said. "The Pennsylvania film tax credit program is an economic development tool to help grow Pennsylvania's local economies, support small business, and keep as many Pennsylvanians employed for as long of a time as possible."

Pennsylvania filmmakers say Shyamalan should be supported as the credits help offset the cost of producing films in the state. But they should be allocated out of the $95 million, not the $5 million.

"No one deserves the tax credits more than Night. He started here. He consistently stays loyal to Pennsylvania," said Andrew Greenblatt, a Philadelphia filmmaker and chief executive officer and executive director of the Philadelphia Film Society.

"His (tax) credits always come from the traditional allotment in Pennsylvania budget, and they should still come from there," Greenblatt said. "He should be at the front of the line. At the same time, the Pennsylvania Film Office should follow the intent of PA lawmakers to support and encourage more films from local filmmakers and build up the industry in Pennsylvania."

A Shyamalan media rep spoke on the phone about the issue but did not call back.