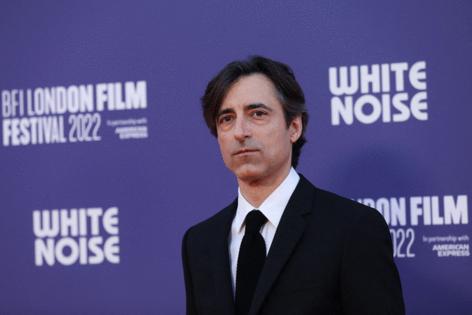 If you were looking for a director to stage a spectacular cataclysm onscreen, Noah Baumbach would probably not be on your short list.

Baumbach's sharply observed, often personal movies, including 2005's "The Squid and the Whale," 2014's "While We're Young" and 2019's best picture-nominated "Marriage Story," have featured plenty of relationship disasters and emotional blow-ups. But there have been no actual explosions, no big car crashes, no visual effects.

"We had to deal with blood a little bit in 'Marriage Story,'" Baumbach says dryly, referring to a scene in which Adam Driver's character accidentally cuts himself while attempting to perform a knife trick. "But that's about it."

So when Baumbach was preparing to adapt author Don DeLillo's seminal 1985 post-modern novel "White Noise," he knew one of the biggest challenges would be filming the book's dramatic centerpiece: a mysterious "airborne toxic event" that descends upon a small college town, forcing its residents — including the brainy, neurotic Gladney family — to evacuate in terror.

A dozen films into his directing career, Baumbach felt ready to tackle something on a bigger scale. "There was a different kind of planning, just finding the right people to help, but it was exciting," he says.

To be clear, "White Noise" is not, by any stretch of the imagination, a typical Hollywood disaster movie. Like the novel from which it is faithfully adapted, the movie, now playing in select theaters before arriving on Netflix Dec. 30, is a satire of the many ways Americans try to distract themselves from their own fear of mortality, throwing themselves into consumerism, entertainment, conspiracy theories and pharmaceuticals. Mashing up quirky comedy with elements of sci-fi, horror and noir, all of it shot through with heady ideas, the film is all but impossible to categorize.

"It is sort of a meditation on death wrapped in a love letter to the '80s and sometimes a screwball comedy," Don Cheadle, who co-stars alongside Driver and Greta Gerwig, offers by way of description.

For years, DeLillo's novel was considered un-filmable. The book takes place in a world that feels shifted off a few degrees from our own. Its characters — including the Hitler studies professor Jack Gladney (Driver), his wife Babette (Gerwig) and their precocious children — speak in deadpan aphorisms that, while often funny, are difficult to translate into real life. It is dense with big ideas, but as a narrative, it's oddly structured and episodic.

But Baumbach — who has loved the book since first reading it as a teenager on the advice of his writer father — was undeterred by the trickiness of the material.

"I was really interested in adapting the tone and the particular strangeness of the book, which is also very familiar," says Baumbach, who has earned two Oscar nominations for original screenplay but had never before adapted someone else's work. "There are many movies that have these unreal tones to them, where you're like, 'This is totally not what I expected but also feels very much how the world feels to me.' There are filmmakers like David Lynch who have made whole careers out of that."