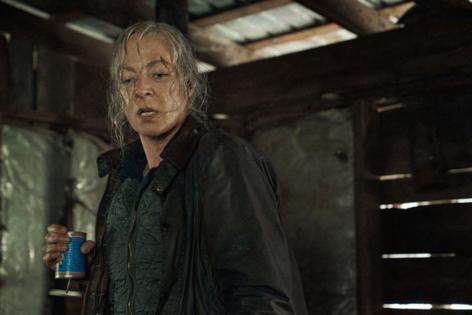 The Oscar- and Emmy-winning actress has long been nobody's fool, but she takes her toughness up a notch (or nine) in "Lou," in which she plays a stone cold survivalist named Lou who has more than a few secrets stowed away. Get too close to those secrets and you'll be sorry, as she proves when she takes out a couple of poor saps in a cabin using a can of food as her only weapon, a scene that brings new meaning to the term "opening up a can of whoop ass."

As the film opens, Lou is not a happy camper: she has a gun to her head and she's ready to pull the trigger, but she's interrupted when her neighbor Hannah (Jurnee Smollett), to whom she rents her space, barges in. It turns out Hannah's ex-, a dangerous former Green Beret, has showed up and kidnapped her daughter. Lou, falling back on her old habits, finds renewed purpose and decides to help her track him down.

They're on Orcas Island, just off the coast of Washington, and a major storm means no one is getting on or off the island for the time being. Along with her trusty dog Jax, Lou sets off on the trail of Philip (Logan Marshall-Green), tracking him with her very special set of skills.

And just how were those skills attained? Well it turns out Lou was CIA for 26 years, much to Hannah's surprise, and any further information is classified.

Directed by Anna Foerster ("Underworld: Blood Wars"), "Lou" plays like an '80s action thriller, with Janney in a brooding role that might have then been played by tough dudes Schwarzenegger or Stallone. It's a lean and mean action thriller — it's even set in the '80s, with background references to the Iran-Contra scandal and the Challenger explosion — with a small cast and characters with clear motivations, and a few twists that illuminate the path along the way.

And Janney, 62, more than holds her own. If this is the beginning of her Neeson run, well, there are worse candidates. Besides, who's going to tell her no?

How to watch: Netflix