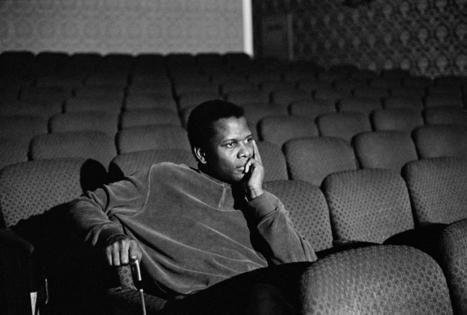 A poor, barely educated son of Bahamian tomato farmers, Poitier seeks his fortune in the United States at age 15, abandoning a Ku Klux Klan-riddled Florida for the more welcoming streets of Harlem. In New York City, Poitier gets a job as a dishwasher in midtown, where a Jewish waiter helps him improve his reading skills, using New York daily newspapers as his primer. Poitier auditions for the American Negro Theater and gets thrown out. As a young actor, he gets a big break in Joseph L. Mankiewicz’s “No Way Out” (1950) playing a Black doctor tending to a racist criminal played by Richard Widmark. Poitier hangs out with actor and music star Harry Belafonte and Broadway and method acting sensation Marlon Brando in 1950s New York City. His relationship with acting rival Belafonte is rocky, but long lasting.

Previously, Black men were represented on the screen by such comic relief actors as Stepin Fetchit (“Showboat”) and Mantan Morland (“Mantan Messes Up”). During the HUAC/Red Scare period, Poitier, a friend of the blacklisted Paul Robeson, gets another break in Richard Brooks’ groundbreaking “Blackboard Jungle,” a 1955 film featuring “Rock Around the Clock” as its theme song. Stanley Kramer’s revolutionary hit “The Defiant Ones” (1958) makes Poitier a star. “A Raisin in the Sun,” “Paris Blues” and “Lilies of the Field,” the film for which the actor wins his 1964 Academy Award for best actor, follow. At the height of a civil rights movement of which he was an important part, 1967 is dubbed “Sidney Poitier Year.” He stars in “In the Heat of the Night,” “To Sir with Love” and “Guess Who’s Coming to Dinner,” becoming the country’s biggest box office draw.

Culture historian Nelson George observes how Poitier, “a walking Yoruba mask,” captivated the camera. To help place all of this in context, Hudlin has assembled cultural historian George and critic Greg Tate, as well as Poitier’s daughters and his surviving wives Juanita Poitier and Joanna Shimkus. Among the artists interviewed for the film are Morgan Freeman, Lou Gossett Jr., Halle Berry, Denzel Washington, Barbra Streisand, Lenny Kravitz, Robert Redford and Lulu. Spike Lee pays his respects with keen observations, including his memory as a child that he would not have jumped off that train to help Tony Curtis in the aforementioned “The Defiant Ones.” Oprah Winfrey adds a deep level of personal appreciation. Poitier’s daughters are admirable representatives of his legacy as a father.

Norman Jewison’s “ In the Heat of the Night,” the film that featured “the slap heard round the world,” hit me like a ton of bricks. But I also love “To Sir with Love,” featuring that theme song by cast member Lulu.

We learn of the affair with the beautiful Dianne Carroll, his “Paris Blues” co-star. In 1967, The New York Times prints a story titled “Why Do White People Love Sidney Poitier So?” beginning a period when the actor would be seen as “not Black enough” by more radical leaders. But Poitier endured and grew, founding First Artists with Newman, Streisand, Steve McQueen and Dustin Hoffman and directed “Stir Crazy” (1980) with Gene Wilder and Richard Pryor, one of the highest grossing films of its time.

“I was not expected to live,” he reminds us of his premature birth. But thankfully for all of us, he did.

ATLANTA — In 2020, A&E was riding high with a hugely successful “Live PD” series where live cameras followed cops on patrol in different cities, an unedited version of “Cops.” But after the George Floyd murders ...Read More