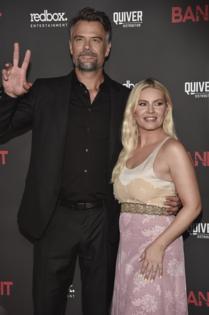 “Bandit,” opening with these words, wants you to know early that in the debate between nature and nurture, the film chooses the latter. A career criminal is more than the sum of his crimes, “Bandit” hammers again and again, even if said man goes to an American prison for wire fraud, escapes said prison, flees to Canada and then proceeds to commit dozens of bank heists over a three-year period, all while lying to those closest to him and generally reveling in the adrenaline of a crime well executed.

You can see how the words don’t quite match the deeds, a disparity that plagues “Bandit” throughout its 120-minute runtime. A perfect example of that? The film’s source material. “Bandit,” directed by Allan Ungar (best known for the Nathan Fillion-led live-action “Uncharted” fan film), works from a screenplay by Kraig Wenman that’s based on Robert Knuckle’s novel “The Flying Bandit,” which recounts how American Gilbert Galvan Jr. used charm, wit and costumes galore to rob 59 Canadian banks and jewelry stores in the mid- to late 1980s before being caught.

Exciting stuff, right? The problem is, “Bandit” is hardly ever actually exciting and tends to lean into the interpersonal drama of the situation. But the film’s relationships border on one-dimensional and are generally boring. It’s as if “Bandit” couldn’t quite figure out if it wanted to be a dramatic crime thriller or a thrilling crime drama, and by trying to split the difference, it failed at both.

Right from the start, “Bandit” leans into the vagaries of life that lead Galvan (played by Josh Duhamel) into a life of crime: a broken home life, national economic malaise, a changing world and so on. But then it immediately follows up with a giddy Galvan escaping from prison and absconding to Canada, learning to become a master bank thief with few compunctions. (Duhamel’s own charisma helps capture the apparently preternatural charm Galvan used to swindle banks across the country.)

On and on it goes, whipping between these abrupt tonal shifts, and it’s not just Galvan (who now goes by Robert Whiteman, you know, because of the prison escape). Andrea (Elisha Cuthbert), a social worker tasked with keeping people on the straight and narrow, falls in love with Whiteman, but when she finds out about his criminal misdeeds, she simply hand-waves it away because banks are bad and they have a kid on the way. Riveting social commentary, no doubt.

Even getting to see Mel Gibson play a crime boss and punch someone in the face comes at the price of having to listen to an unsubtle monologue about ’80s pop music symbolizing the decline of America beforehand. “The Godfather” this is not.

Speaking of, the soundtrack? It’s a slightly eclectic but enjoyable mix of ’80s pop music. You know what’s not enjoyable? Having the most dramatic scene in the movie basically ruined because someone thought it was a good idea to play Yello’s “Oh Yeah” during it.

Probably the only consistent element in “Bandit” is the police task force tracking the seemingly elusive Whiteman. It’s very procedural drama, but Nestor Carbonell and Swen Temmel’s dogged police officers provide much of the film’s tension.

In the end, “Bandit” doesn’t have the moral authority to preach about a broken economic system that causes suffering to those already hurting, nor does it have the courage to lean into criminal revelry. Too few moments stand out because the film’s plot is just too disjointed. (One notable exception is a hilarious montage of Whiteman’s costumes.)

LOS ANGELES — Comedian Billy Eichner is continuing to advocate for his new rom-com, “Bros,” after its meager box office showing this weekend and has vowed to keep tweeting about the film to spite haters.

LOS ANGELES — Depeche Mode will return next year with a new album, “Memento Mori,” and an accompanying tour of North America and Europe. The announcement comes only a few months after the group’s co-founder and ...Read More

LOS ANGELES — It it a marriage too beautiful to last? Tom Brady and Gisele Bündchen have both hired divorce attorneys, according to a Page Six report Tuesday.

“I don’t think there will be any coming back now,” a ...Read More

Pitt was investigated for child abuse on a 2016 flight from France to Los Angeles, but no charges were ...Read More

The U.S. Supreme Court won’t weigh in on a copyright fight over the Paramount Pictures movie “What Men Want.”

The decision brings to an end at least part of author and screenwriter Joe Carlini’s multiyear fight ...Read More