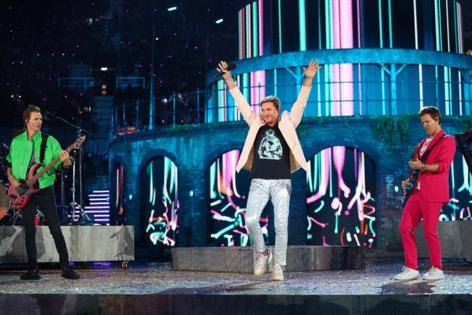 That was the much-buzzed-about Duran Duran on its first U.S. tour in 1981 at Duffy's in south Minneapolis.

"I think I remember it," Duran Duran singer Simon Le Bon said. "It was more like a large bar."

Indeed, pale green on the outside, totally rocking on the inside in the back room, which music fans reached after walking past a long blue-collar neighborhood bar.

Did Le Bon ever think that more than 40 years later Duran Duran would be headlining U.S. arenas and amphitheaters?

"In the beginning we weren't looking at anything 40 years down the line. We were looking a month ahead at the most," Le Bon said last week from London. "One of the things about music and the whole job, it really keeps you in the moment."

Duran Duran will kick off its North American tour on Friday at Treasure Island Casino amphitheater in Red Wing. It will be the band's first U.S. date as newly voted members of the Rock & Roll Hall of Fame.

"It's a club we never thought we'd get invited to, being English New Romantic pop stars, as we've been called," said Le Bon, 63, whose band made it into the Rock Hall in its first year on the ballot, though the group was eligible 15 years ago. "We're actually very, very proud of it. It's the closest you can get to rock 'n' roll knighthood."

Duran Duran, Princess Diana's favorite band, is treated like royalty in the U.K., where they just performed at the Platinum Jubilee of Elizabeth II.

"We play for royalty," Le Bon clarified. "It doesn't make us royalty."