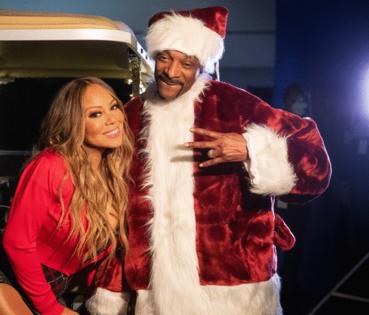 By now, Carey is used to her song “All I Want for Christmas Is You” skyrocketing to the top of the charts each year as the holiday approaches. Now, she wants to trademark the term “Queen of Christmas,” and that isn’t sitting well with other singers.

Last March, Carey officially filed a trademark bid for “Queen of Christmas,” which was made public on July 12. According to the application filed with the U.S. Trademark Office, the trademark would cover a substantial range of products, including fragrances, lotions, nail polish, jewelry, cups, mugs, sweatshirts, food and drink, ornaments — and music.

Speaking with Variety, she said, “Christmas has come way before any of us on earth, and hopefully will be around way after any of us on earth.” Chan has built a career on Christmas music and released an album titled “The Queen of Christmas” in September 2021. The singer said she feels strongly that nobody should “monopolize” anything about Christmas.

“That’s just not the right thing to do. Christmas is for everyone. It’s meant to be shared; it’s not meant to be owned.”

“And it’s not just about the music business,” Chan continued, noting the breadth of Carey’s application.

“If you knit a ‘queen of Christmas’ sweater, you should be able to sell it on Etsy to somebody else so they can buy it for their grandma.”

On Tuesday, the story caught the ear of Darlene Love, who became indignant at the possibility that she could no longer call herself the “Queen of Christmas.”

“Is it true that Mariah Carey trade marked ‘Queen of Christmas’?” the prolific backup singer-turned-lead vocalist wrote on Facebook. “What does that mean that I can’t use that title? David Letterman officially declared me the Queen of Christmas 29 years ago, a year before she released ‘All I want For Christmas Is You’ and at 81 years of age I’m NOT changing anything.”

“I’ve been in the business for 52 years, have earned it and can still hit those notes!” Love continued. “If Mariah has a problem call David or my lawyer!”

In 2020, Carey told The Times the annual return of “All I Want for Christmas Is You” caught her by surprise, as it wasn’t even her idea to make Christmas music in the first place.

“It was kind of an accident,” she said. “When I did that first Christmas album, ‘Merry Christmas,’ it was pretty early in my career. The label was like, ‘You should do a Christmas album, it’s a great idea.’ I was like, ‘Hmm, I don’t know.’ It seemed a little premature, like I was jumping the gun. The success of it was definitely a surprise.

“I mean, ‘All I Want for Christmas Is You’ was the first Christmas song I ever wrote.”