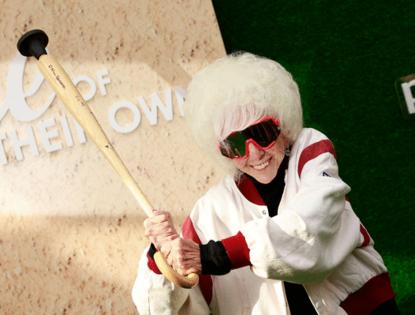 At the end of the season, the ballplayers of the original “A League of Their Own” movie happily went home to their husbands. In the new show, there’s no need to pretend.

The Prime Video series, which premiered Friday, is under no illusion that the women making up the Rockford Peaches and the rest of the All-American Girls Professional Baseball League are all straight. In the decades since the league, created as a fill-in during World War II, folded in 1954, several of its real-life stars have come out as gay, including 95-year-old Maybelle Blair earlier this year.

Penny Marshall’s 1992 film danced around it. The series is a full-blown Pride parade.

“So many shows we watch, they show you just a little piece or a little taste or one story. All you get is one,” D’Arcy Carden, the 42-year-old “Good Place” alum who stars as globe-trotting first baseman Greta, told the Daily News.

“I think what the writers wanted to do with this is tell the story of what it was. And that included all of these women that were so gay.”

Adding that history to “A League of Their Own” opens up their world, as does the introduction of Black women who were shut out of the league. With that comes the reality of the mid-1940s, when looking or dressing the wrong way meant trouble, let alone holding hands. But the cast didn’t just want to tell the horror stories.

“It’s important for the queer community to see these women who came before us and their struggles and the challenges, but also the joy. They were doing the thing they loved for the first time in their life,” Melanie Field, who plays Jo, a Queens slugger, told The News.