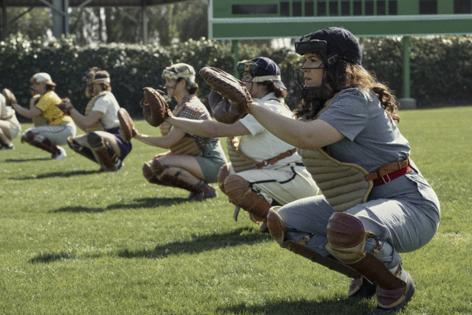 It’s reasonable for fans to be wary of any remakes or reimaginings of their favorite movies or television shows. Half the time they come out as watered-down copies of the original, and even the creatively successful ones can ultimately still feel more like hollow cash-grabs than genuinely meaningful art.

That brings us to “A League of Their Own,” Prime Video’s television adaptation of the beloved 1992 Penny Marshall film that featured a fictionalized version of the real-life All-American Girls Professional Baseball League that operated in the 1940s and ‘50s. The long-awaited series, which was co-created by “Broad City” star Abbi Jacobson and shot throughout western Pennsylvania last summer and fall, is finally making its debut Friday.

Unsurprisingly, expectations for this one have been sky high since the second it was announced. “A League of Their Own” is a classic sports movie that has been resonating with multiple generations of cinephiles for 30 years. If Jacobson and co-creator Will Graham had gotten this one wrong, they probably would have never heard the end of it.

The Post-Gazette was given early access to the show’s eight-episode first season. “A League of Their Own” fans, now is the time to exhale: Jacobson and Graham have produced a fun, immaculately made and emotionally vibrant experience that is exactly what a 2022 update of this beloved story should look, sound and feel like.

Jacobson stars as Carson Shaw, a housewife whose dreams of playing professional baseball are fulfilled when she becomes the starting catcher for the Rockford Peaches. The team consists of a delightful bunch of misfits who are (mostly) just there to win games. The new Peaches include the self-assured Greta Gill (D’Arcy Carden), power hitter Jo De Luca (Melanie Field), ultra-focused Jess McCready (Kelly McCormack) and ornery pitcher Lupe Garcia (Roberta Colindrez).

As the Peaches take Rockford and the league by storm, Max Chapman (Chante Adams) awaits her opportunity to prove that a Black woman can also make it as a pro ball player. Her journey of athletic and personal self-discovery is juxtaposed throughout the season with the Peaches’ efforts to become the league powerhouse they know they’re capable of being.

One of the few complaints about the original “A League of Their Own” was that it primarily centered the stories of straight white women trying to make it in the All-American Girls Professional Baseball League. The series takes on those elements in smart, elegant and sometimes devastating ways. And yes, the way it integrates that increased diversity is period appropriate, so those objections are entirely unwarranted.

Admittedly, Season 1 of “A League of Their Own” does start off a bit sluggishly. Fans of the movie may feel antsy as the show repeats a familiar story structure as it establishes its setting and the new Peaches. That long-winded setup eventually gives way to plenty of well-crafted baseball action and character evolutions.

“A League of Their Own” certainly looks like no expense was spared in terms of transforming western Pennsylvania into World War II-era Rockford, Illinois. From the clothes to the cars to the baseball stadiums themselves — including the Peaches’ home field that Amazon and Sony built on the campus of CCAC Boyce — it has the feel of a high-end production from top to bottom.

Expect to get a bit misty-eyed during a few stretches of this inaugural “A League of Their Own” outing. By the end of the season, the relationships between the Peaches feel so earned that a few saccharine yet moving story beats may elicit waterworks. The joy and freedom baseball allows them to experience is also sometimes contrasted with the harsh realities women — especially BIPOC and/or LGBTQ+ women — constantly faced during that time period.