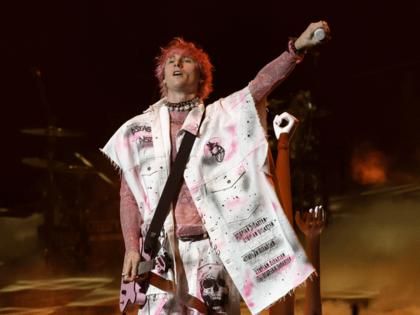 One of Machine Gun Kelly’s tour buses was defaced with a homophobic slur and a vulgar drawing in Nebraska on Thursday — but the rap rocker said that whoever did it missed the mark.

The incident happened ahead of Kelly’s show that night at the CHI Health Center Arena in Omaha, with special guests Travis Barker and Willow.

The artist’s caravan includes at least four buses, each in a different color: yellow, blue, green and red, which was the only one tagged with a hateful message, according to TMZ.

Somebody wrote “rap devil f----t” on one side and drew a large penis on the other side.

“You’re so dumb. You spray painted a bus thinking it was my bus… wrong bus, you f---ing idiot! Do the first part of the crime right,” the 32-year-old performer said in a video recorded from his hotel room.

“You could have been at home, cuddling with your partner or doing something, and instead you were like, ‘Goddamn it, I just wish he’d go up to his hotel room so I can spray paint this d--k!’” he added.

The Omaha Police Department later confirmed that the incident was reported around 9:40 a.m., and that officers responded to a report of vandalism of a tour bus near 13th and Farnam Streets, the Omaha World-Herald reported.

The paint was easily removed with mineral oil, police said. There was no permanent damage to the bus.

Kelly didn’t even get to see the hateful message.

“They washed it off before I even saw it. Aren’t you sad? I’m still in bed, I didn’t even get to enjoy it,” he said in his video. “You suck.”

In June, it was Lizzo using an ableist slang term for “spastic” in the tune "Grrrls." This week, it's Beyoncé ...Read More