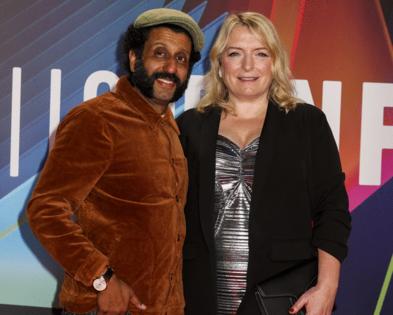 In "Ali & Ava," a lovely surprise from English filmmaker Clio Barnard, music is more than just a soundtrack; it's the characters' very lifeblood.

When we first meet Ali (Adeel Akhtar), a part-time DJ in the northern English city of Bradford, he's cutting loose on top of his station wagon, dancing to a pounding Afrofuturist beat. Later that day, Ava (Claire Rushbrook) will take a bus across town and hear a Sammi Smith song that perfectly sums up her loneliness. Over the course of the movie she'll sing at a karaoke bar, work out to a Bollyrobics video and drop in on Ali's private man-cave, an inner sanctum stuffed with vinyl, sound equipment and other totems of a lifelong love of music.

That love isn't the only thing these two middle-aged strangers have in common, even if they do spend their first date, if that's what it is, jamming out to each other's favorite tunes. But it does account for the strange, improbable joy that animates this movie and the charming interracial love story it has to tell.

Superficially, "Ali & Ava" may resemble the bleak social-realist melodramas "The Selfish Giant" (2013) and "Dark River" (2018) that, along with Barnard's experimental 2011 documentary, "The Arbor," have established her reputation as a sensitive chronicler of Yorkshire misery. But here the familiar trappings — the cramped housing-estate confines, the cycles of poverty, addiction and abuse — are, if not quite transcended, then at least held in check by a bracing, open-hearted spirit.

Witness the scene in which Ali, kindly offering Ava a ride home, drops her off in a white neighborhood not known for its kindness to Pakistani immigrants like himself. As children merrily hurl rocks at his car, Ava protests, while Ali has the inspiration to pump up the volume on his radio; within seconds, a hostile confrontation almost becomes a block party. If that sounds naively utopian, it somehow doesn't play that way. Barnard's grounded yet kinetic filmmaking — her collaborators include director of photography Ole Bratt Birkeland and editor Maya Maffioli — catches you up in its own infectious, wittily syncopated rhythms.

You might be swept slightly off-balance by this movie, which is a fair approximation of how Ali and Ava feel most of the time. Their good-humored tenacity is a natural response to years of heartache and hardship, which they've spent serving as the emotional glue to their large, fractious extended families.

Ava, an Irish-born widow with four grown children, spends a lot of time babysitting her grandkids, with unfeigned delight and nary a complaint. Ali, who lives in close proximity to his mother, sister and other relatives, also works as a landlord, and his many tenants, most of them immigrants as well, regard him less as a rent collector than a beloved uncle.

It's one of Ali's routine favors — he drives a tenant's young daughter, Sofia (Ariana Bodorova), to and from school each day — that brings him into initial contact with Ava, an assistant in Sofia's classroom. From there, things accelerate quickly, from getting-to-know-you chitchat to impromptu dance parties, plus some charming through-the-mail-slot flirtation. Later, there are dimly lit intimacies and discreet cutaways — Barnard respects her characters' modesty, perhaps to a fault — and a quick romantic getaway by train. Mostly, there's a bracing openness to new possibilities, as well as a refusal to even consider the assumptions — some racist, some ageist — a concerned onlooker might bring to the situation.

Still, those assumptions exist, along with other complications. Ali is about to separate from his wife, Runa (Ellora Torchia), but isn't as ready as she is to call it quits — partly because he still loves her, and partly because his tradition-minded family doesn't believe in divorce. Ava's son Callum (Shaun Thomas) is a racist hothead who violently disapproves of his mother's new companion. It's telling that Callum idolizes his own late dad, who subjected Ava to repeated drunken bouts of physical abuse.

Barnard, unfurling her story with swift forward momentum, keeps those wounds largely in the past. But their residue lingers in the present, and especially in the grit and texture of the movie's superbly paired lead performances.

Akhtar plays Ali with the emotional generosity and headlong enthusiasm of an overgrown child, and you can see in his let's-get-the-party-started boisterousness a sliver of what might have pushed the more demure, independent-minded Runa away. You could practically warm your hands over Ava's luminous, open-faced smile, but the stellar Rushbrook also shows you, in heart-swelling glimpses, the sadness behind that smile.

Ali chases away some of that sadness, just as Ava brightens his gloom. They do this matter-of-factly, sans grand romantic gestures or speeches, which would be anathema to their hard-scrabble lives and the scrappy, tough-minded movie they find themselves in. Barnard has made an ode to the beauty of messy, imperfect lives and their ability to converge at improbably perfect moments. Maybe it ends a beat too soon, but then so do some of your favorite songs.

How to watch: In theaters

DETROIT — The air is crispy, the leaves are turning and jack-o'-lanterns are starting to show up on front porches.

It's the best time of ...Read More

LOS ANGELES — The “Black Panther” franchise has revealed only about thing for sure about its new titular hero.

The romance that has long been teased in "House of the Dragon" is finally official.

The seventh episode of HBO's "Game of Thrones" prequel starts with a funeral and ends with the wedding of Princess Rhaenyra Targaryen and...Read More

When "Saturday Night Live" returned this weekend for its 48th season, the grandaddy of all sketch shows ripped itself apart before anyone else could. In a cold open, host Miles Teller and cast member Andrew Dismukes played...Read More