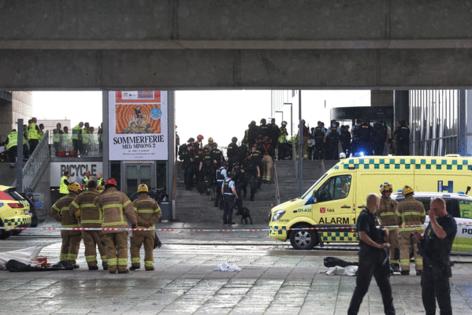 The English singer-songwriter released a statement confirming that Sunday's show at the Royal Arena would not go on in the wake of the shooting, which left three people dead and three people in critical condition.

"I'm heartbroken along with the people of Copenhagen," Styles tweeted.

"I adore this city. The people are so warm and full of love. I'm devastated for the victims, their families, and everyone hurting. I'm sorry we couldn't be together. Please look after each other."

The "As It Was" hitmaker was expected to perform Sunday at Copenhagen's Royal Arena as part of his Love on Tour concert series, which recently stopped in Stockholm and Oslo. Denmark police shut down the Royal Arena, which is located minutes from Field's shopping mall, where the tragedy occurred.

According to the Associated Press, authorities arrested a 22-year-old Danish man in connection with the shooting and are still investigating the attack. Copenhagen police inspector Søren Thomassen identified the three victims as a man in his 40s and "two young people."

"It is pure terror. This is awful," said Hans Christian Stoltz, a 53-year-old IT consultant who was bringing his daughters to see Styles, in an interview with the Associated Press.

"You might wonder how a person can do this to another human being, but it's beyond … beyond anything that's possible."