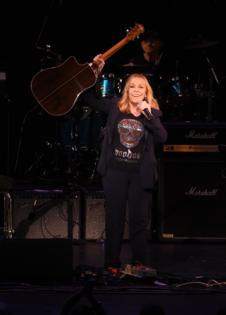 Rickie Lee Jones went from the coffeehouses of Los Angeles to the cover of Rolling Stone magazine in what must have seemed like the blink of an eye to some observers.

Of course, no success story is quite that simple — and it would be a mistake to label this one as happening overnight. Yet, the singer-songwriter’s self-titled debut in 1979 was certainly met with immediate and overwhelming success, thanks to in large part to the now-iconic jazz-pop single “Chuck E.’s in Love.”

A year after the album’s release, Jones won the trophy for best new artist at the 22nd Annual Grammy Awards.

I recently had the chance to chat with the star about the memoir, which has received praise from Rolling Stone, Pitchfork, NPR and other media outlets.

Q: Why did you want to write a memoir?

A: Because there are too many ghosts around and they are always tapping on my head and my shoulder telling me to write their story. So, I wrote their story out of respect to all the ghosts that follow me around.

Q: Which ghosts were the most persistent?

A: I kept hearing from my Aunt Bea, who is my father’s sister, who died when he was only 20 or 21. Legend had it that she was a jazz singer and a friend of Benny Goodman or the Dorseys. One of those characters would stay at her house when they passed through town.

So, I thought, “Well, she must have really been a singer.”