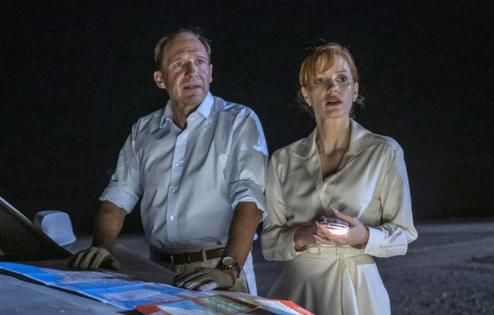 Shooting scenes under the Moroccan sun helped “The Forgiven” stars Jessica Chastain and Ralph Fiennes add a little heat to their twist-filled film.

The actors portray a vacationing couple who must face Moroccan customs and their own guilt after accidentally killing a local boy with their car.

“In certain areas that we were filming in, sometimes on a day off I would go to some markets or whatnot, and I would really feel like people were staring at me,” Chastain told the Daily News. “Having red hair in these not-very-populated areas of Morocco makes you feel like people are complimentary of it, but you definitely feel like you can’t go undercover.”

“In a story like this that really explores gender and this idea of being watched ... I found that really added to filming in that culture.”

“The Forgiven,” which hit theaters Friday, depicts a whirlwind chain of events after Fiennes’ David hits the boy while driving with Chastain’s Jo to a lavish party in the Sahara Desert.

The tragedy introduces a clash of cultures, as David is skeptical when the boy’s father demands he travel to their hometown to lay the child to rest.

“The attraction of the part was the journey to confronting what he has done, having a coldness about it,” Fiennes, 59, told The News. “He does pretty uncool, wrong things, initially, dealing with the death of the boy.”

The release of “The Forgiven” comes three months after Chastain, 45, won her first Oscar for her portrayal of the title televangelist in “The Eyes of Tammy Faye.” She is also known for the space thriller “Interstellar” and for “Zero Dark Thirty,” about the U.S. pursuit of Osama Bin Laden.

Chastain enjoyed playing another complex character in “The Forgiven,” as Jo goes on a journey of self-discovery after the accident interrupts her life of routine.