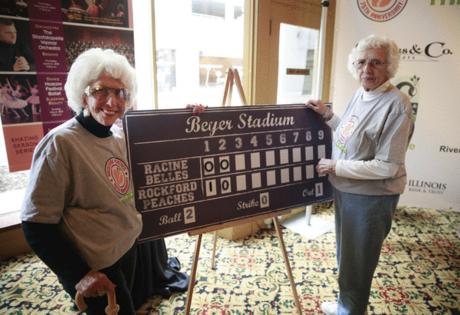 CHICAGO — For many of the women and girls playing baseball this summer, the Rockford Peaches — a team that hasn’t played in more than 60 years — remain a source of inspiration. One of the original four teams in the All-American Girls Professional Baseball League (AAGPBL), the Peaches won the most championships in league history.

Even though the team dissolved in 1954, the organization lives again through the efforts of baseball historian Kat Williams and the International Women’s Baseball Center along with the City of Rockford — and of course the 1992 movie “A League of Their Own.”

The film has allowed the spirit of the Peaches to continue through new generations, and Rockford Mayor Tom McNamara proclaimed Friday and Saturday “A League of Their Own 30th Anniversary Celebration Days” in the city. Both the IWBC and Rockford will honor the movie’s anniversary with a series of events concluding with a premiere of the upcoming Prime Video series that reimagines the beloved baseball film.

“Women have always been part of the game,” said Williams, the IWBC president, whose goal is to commemorate the contributions women have made to the sport throughout the years. “We’ve always played, umpired, coached, tended the fields, kept the stats, owned the teams. We have always been there.

“Well, they do now and it’s Rockford, Illinois.”

An announcement in the Chicago Tribune in February 1943 said “the girls will wear dainty raiment instead of the customary mannish attire. They will not be bloomer girls, tho.” Tryouts were held in various cities with spring training at Wrigley Field. It was baseball, not softball, same as the men’s game but with some adjustments. For example, the basepaths were 65 feet instead of 90.

For the women chosen, it meant an opportunity to get paid to play, but just like the majors, that did not extend to everyone as the league was segregated. The AAGPBL folded in 1954 but remains an important piece of women’s baseball history. Nearly 600 women played in the league.

The Rockford Peaches — both the real ones and the Hollywood version — are a big part of that legacy. When “A League of Their Own” debuted in theaters in 1992, Penny Marshall’s film reawakened fandom and breathed new life into the long-defunct ballclub.