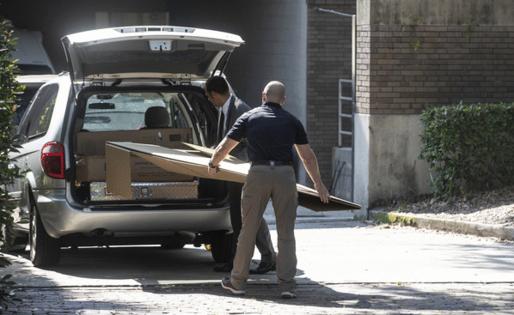 ORLANDO, Fla. — Aaron De Groft has been replaced as director and CEO of the Orlando Museum of Art, the organization announced late Tuesday night, amid the fallout of questions about the authenticity of paintings by artist Jean-Michel Basquiat and an FBI raid on the museum last week.

“Effective immediately, Aaron De Groft is no longer Director and CEO of Orlando Museum of Art,” Cynthia Brumback, chair of museum’s board, said in an emailed statement to the Orlando Sentinel. “Joann Walfish, a longtime employee who has served as CFO, has been appointed interim COO and will lead the organization during this transition.”

The statement did not say if De Groft was fired or resigned.

In May it was reported that the FBI’s Art Crime Team was investigating the authenticity of 25 paintings in the Orlando museum’s “Heroes & Monsters” exhibit that were billed as being by Basquiat. The previously unseen paintings were reported to have been recovered from a Los Angeles storage unit in 2012, some 24 years after Basquiat’s death. If real, they could be worth $100 million or more, experts said.

Agents raided the museum on Friday, seizing the 25 paintings attributed to Basquiat. FBI Special Agent Elizabeth Rivas’ affidavit said the agency’s “investigation has revealed attempts to sell the paintings using false provenance, and bank records show possible solicitation of investments in artwork that is not authentic.”

De Groft was on vacation when the raid happened, according to a museum spokeswoman, and has not commented on the FBI’s actions.

The application for a search warrant listed two possible crimes: conspiracy and wire fraud. Selling art known to be fake is a federal offense.

Rivas’ sworn statement said De Groft pressured an expert hired to authenticate the paintings to stay silent after she expressed concerns about her name being attached to the Orlando exhibit, admonishing her in an email to stay in her “limited lane.”

Jordana Moore Saggese, a professor of art at the University of Maryland who wrote a book on Basquiat, confirmed in an email to the Orlando Sentinel she is the expert referenced in the affidavit. She wrote she is cooperating with investigators and felt “bullied, harassed [and] insulted.”

“The Orlando Museum of Art’s Board of Trustees is extremely concerned about several issues with regard to the [Basquiat] “Heroes & Monsters” exhibition, including the recent revelation of an inappropriate e-mail correspondence sent to academia concerning the authentication of some of the artwork in the exhibition,” Brumback said.