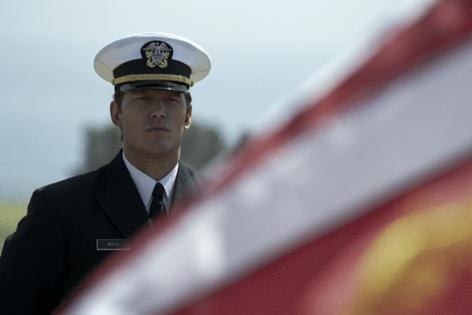 “The Terminal List” begins with scenes of a military funeral at what appears to be Arlington National Cemetery, over the top of which we hear a bit of the Biblical story of how God instructed Gideon, a military leader, to choose the men who would fight under him.

The often-compelling but ultimately uneven debut season of the action-thriller series — debuting this week on Prime Video and based on the novel of the same name by Jack Carr — soon takes us back in time two weeks, to show us Reese with the men under his command.

The bravado is big and the testosterone flows as Reese tells the men — men he can trust, men he considers brothers — that they have a green light for an operation to take out a chemical-warfare expert in Syria. That said, they aren’t going into a hostile spot to make a bunch of noise.

Of course, we already know better.

Once the unit is inside the tunnels leading to the target — tunnels half-filled with water — the situation turns dire, and lives are lost.

Reese returns home, with headaches and memory issues, seemingly from a concussion. He returns to a wife, Lauren (Riley Keough, “The Devil All the Time”), and a daughter, Lucy (Arlo Mertz, “Mank”), who love him but also to government men who have questions for him about what went wrong — questions he doesn’t appreciate.

Directed by Antoine Fuqua (“Training Day,” “The Magnificent Seven”), the debut episode, “The Engram,” establishes the push-and-pull nature of the series. “The Terminal List” attempts to blend the serious issue of the mental and physical toll war takes on combatants with thrilling, at times over-the-top action sequences and a narrative that becomes increasingly far-fetched as the series runs through its eight hourlong installments.