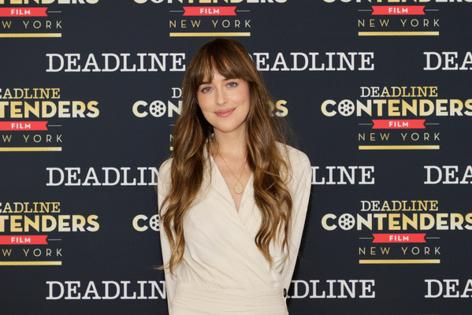 "I signed up to do a very different version of the film we ended up making," Johnson said in the magazine's latest cover story.

The "Cha Cha Real Smooth" actor said she faced a number of behind-the-scenes challenges from conflicting feedback from the studio and directors. But she singled out James, who "had a lot of creative control, all day, everyday."

Johnson told Vanity Fair how James' vision for the films included "incredibly cheesy" inner monologues that "wouldn't work to say out loud" onscreen. She also recalled how James, who served as a producer on the three franchise films, threw out a script after actor Charlie Hunnam dropped out of the project due to a scheduling conflict. Hunnam, initially slated to portray Christian Grey, was later replaced by Dornan.

"It was always a battle," Johnson said. "Always."

The creative differences also manifested in filming. Johnson said she and fellow cast members would film one set of takes following James' creative decisions and another set for "the movie that we wanted to make."

Representatives for James did not immediately reply to the L.A. Times' request for comment.

For Johnson, "Fifty Shades" felt like "mayhem all the time." But she doesn't regret her time as Anastasia Steele.

"If I had known at the time that's what it was going to be like, I don't think anyone would've done it. It would've been like, 'Oh, this is psychotic.' But no, I don't regret it," she said.

During the interview she also quelled rumors about a feud with co-star Dornan, noting that "he's like a brother to me. I love him so, so, so much."

Despite the creative headaches, Johnson said "[James] is a very nice woman, and she was always kind to me and I'm grateful she wanted me to be in those movies."

"Look, it was great for our careers," she added. "So amazing. So lucky. But it was weird. So, so weird."