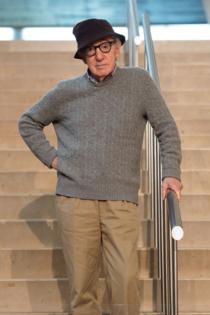 The veteran actor announced Sunday on social media that he will connect with the disgraced director via Instagram Live. They will likely discuss Allen's new essay collection, "Zero Gravity.

Baldwin's announcement comes more than a year after HBO released a documentary that shed new light on allegations of child sexual abuse leveled against Allen by his daughter, Dylan Farrow.

"Let me preface this by stating that I have ZERO INTEREST in anyone's judgments and sanctimonious posts here," Baldwin wrote in the caption of his post.

"I am OBVIOUSLY someone who has my own set of beliefs ... . If you believe that a trial should be conducted by way of an HBO documentary, that's your issue."

In a video attachment, Baldwin held up a copy of the scorned filmmaker's book, "Zero Gravity." The book is being distributed by Skyhorse Publishing, which has developed a reputation for representing divisive authors.

The comment section under Baldwin's announcement was flooded with variations of "NO," "Nope" and "That's a hard no." Some condemned Allen as a predator who doesn't deserve a platform.

According to NME, the "30 Rock" star previously defended the "Midnight in Paris" director upon the release of HBO's "Allen v. Farrow" doc by tweeting, "Who needs courtrooms or rule of law when we have trial by media?" Baldwin appeared in Allen's 2012 romantic comedy "To Rome with Love."

Baldwin has also been the subject of scrutiny. In October, the actor and producer fired a prop gun that killed cinematographer Halyna Hutchins on the set of the western film "Rust," prompting a criminal investigation, multiple lawsuits and a wave of public scrutiny.

Shortly after Hutchins' death, Baldwin tweeted, "My heart is broken for her husband, their son, and all who knew and loved Halyna."