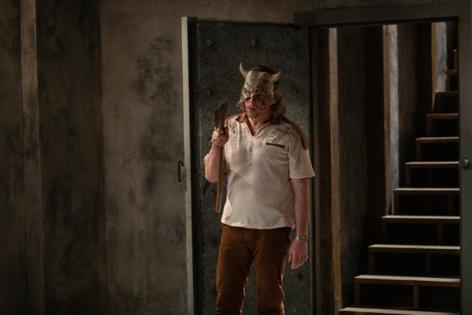 Scott Derrickson's "The Black Phone" introduces the latest in a long line of iconic Universal Studios horror characters with the Grabber, a sadistic serial killer and part-time magician who wears a set of unsettlingly dynamic devil masks.

The brainchild of Derrickson, designer Tom Savini and fabricator Jason Baker, the masks convey three exaggerated expressions of the villain: joy, despair and utter nothingness in a haunting reinterpretation of the traditional comedy/tragedy masks.

Played by Ethan Hawke, the Grabber is a departure from many of the screen's most infamous masked killers in part due to his evolving masks, but also because of his loquacious demeanor. "If you look at Jason [Voorhees] or Michael Myers or Ghostface, they don't talk," said Derrickson. "The idea of this very chatty serial killer behind a mask was really interesting to me. I knew if we got that right, it could be all the more unnerving for it."

We answered all your burning questions about the masks the Grabber wears directly from the people who brought the villain to life.

What made Tom Savini and Jason Baker right for the task for crafting the masks?

"Obviously Tom's a legend, but I didn't hire him for that reason," said Derrickson. Actually, he'd asked Blumhouse producer Ryan Turek for the best makeup effects companies that specifically made masks. Turek gave him a list of five companies, with Savini and Baker's Callosum FX Studios being one of them.

"I went to all five companies and said 'Here's the script, here's the concept. Give me a piece of concept art that shows me what this mask is going to look like,'" he said. "And all five came back with interesting ideas. I remember the other designers had more elaborate concept work and descriptions and all that. Tom Savini sent back a single pencil sketch that was almost exactly what you see in the movie. And as soon as I looked at it, I was like 'Oh my God, that's it.'"

The sketch was drawn by Levi Simpson, Baker's brother-in-law. "He and I were doing some sketches, we sent them to Scott, and so it was basically the three of us that came up with a design: Levi, me and Scott," said Savini.

How did the look of the masks evolve over the course of production?

"In the script, we had described old, cracked, leather, antique masks that had a painted devil on both of them," said Derrickson. "One with a smile, one with a frown, like a traditional comedy/tragedy set of masks. And so I started with adding 'What if he had a third mask that he introduces himself with that has no mouth? That could be weird.'"