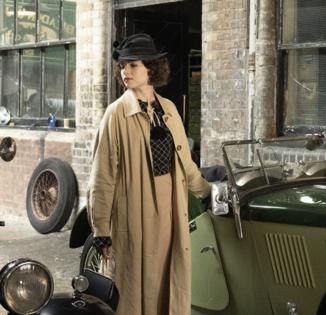 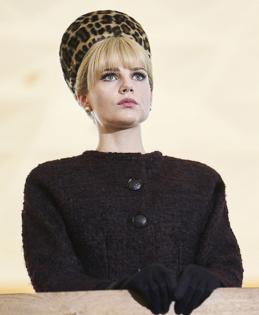 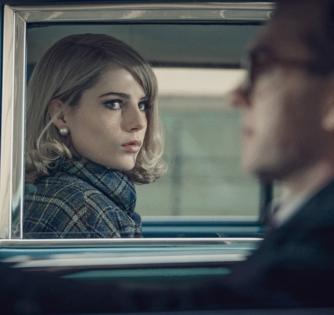 It wasn’t some great moment in the theater that inspired British actress Lucy Boynton. It was the Stones, the Beatles and country music.

“I was born in New York and grew up my first five years there and have this image of my dad coming home from the office, a man in a suit, and the Beatles playing. I grew up with my dad being such a music enthusiast, so I grew up with Dylan and the Beatles and the Stones and country music with the sense of that feeling you get when you hear a piece of music that ignites a feeling in you,” she says.

“Acting is a place that you can do something with those feelings. So the second I found somewhere to put all that, it felt very organic. It makes this whole acting work feel like less pretend.”

As a kid she continued to pretend, snatching her first role when she was only 11. The film was “Miss Potter” and Boynton’s parents figured she would not land the part, and that would be the end of that. Not so.

“I’d been reading Beatrix Potter books my whole life, and to get to exist in that space and with a director like Chris Noonan who was so nurturing and made the whole thing fun but also really thorough – it was a real acting job rather than trying to make it ‘kid-friendly,’” she recalls.

“He really introduced me to what it (acting) was going to be, and having tasted that for the first time at 11, there was no going back. It was like stepping through to Narnia and you're never going to unsee those things, unfeel those things.”

She has continued to feel those things and is best known for her role in “Bohemian Rhapsody” which starred Rami Malek as rock star Freddie Mercury. Since then tabloids have linked her and Malek as a couple, but she says, “I get very shy talking about that side of my life. That movie came after ‘Murder on the Orient Express’ (in which she played Countess Elena Andrenyi) which was the first big studio film I’d done with Fox. But ‘Bohemian’ was a very difficult experience — not the smoothest sailing at all times — but I think it was a really fantastic education because at the center of that story was Freddie Mercury and Queen and the passion that everyone had for telling his story made everyone — even through the difficult days — deliver to their greatest capacity and greatest effort.”

Boynton’s publicist won’t allow her to say whether she’d like to marry and have a family someday, but she is free to talk about her struggling years. “I was in my late teens, early 20s,” she remembers. “I was still able to live at home with my parents, that alleviates me at least having to just ingest only peanut butter,” she laughs.

“It was difficult, but I’m so aware of how much I love this and what’s going on now that I forgot there was a period of time where everyone around me was saying, ‘Are you sure? Because this seems to be a rinky-dink setup, is it going to work out for you?’ I was absolutely adamant that I would keep trying and crossing my fingers.”

Evidently crossing her fingers worked for Boynton because she’s everywhere you look today. She’s starring in “Why Didn’t They Ask Evans?” the Agatha Christie puzzler streaming on BritBox. She’s executing the spy thriller, “The Ipcress File,” on Prime Video and soon she dons the powdered wig of Marie Antoinette in “Chevalier” and co-stars in the gothic mystery “The Pale Blue Eye” with Christian Bale.