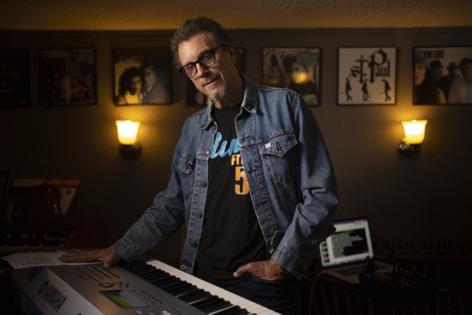 MINNEAPOLIS — It's been 37 years since Paul Peterson dropped his first album under the meticulous guidance of Prince. Despite releasing four solo albums and several group projects since then, Peterson never found his own voice — until now, with his new album, "Break on Free."

"I think this record represents me better than any of the other records I've made in my life," the singer said of his first solo album since 2003. "Because I didn't have anybody breathing down my neck saying what I should do or what I shouldn't do, I get to be 100% authentically me. It's taken me this long to figure out who the hell that is."

The 12-song LP is as eclectic as it is alluring. It gets funky like the Minneapolis Sound that Peterson learned with the Time and delivers with St. Paul & the Minneapolis Funk All-Stars. It has jazzy touches like those he plays with LP Music and the Peterson Family. It rocks like he does with the Classic American Rockers. It has some spiritual vibes like he offers as music minister at the Church of St. Patrick in Edina.

"I gave myself permission to be myself finally," said Peterson. "During my 40-year career I've played multiple genres and it always boils down to: Can you play it authentically? Do you do it passionately? Do you do it from your heart?

"Whether it's going to be the rock guy, the funk guy, the jazz guy, it's all music at the end of the day."

On "Something in the Water," Peterson sounds like Prince, who taught him phrasing for the Family's 1985 debut featuring "Nothing Compares 2 U." He sounds like Stevie Wonder on a cover of the superstar's "Love's in Need of Love Today" with a jamming ending. He sounds like Paul Peterson on "Song for Julie," a spiritually tinged tune for his wife of 31 years.

Growing up with jazz-playing parents (Willie Peterson and Jeanne Arland Peterson) and R&B-loving older siblings (Linda, Billy, Patty and Ricky), Peterson wasn't interested in rock at all until he began dating Julie Ryan in high school.

"I'd pick her up in the car and she'd take over controls of the radio and switch it to KQRS and I'm like 'I don't want to hear this crap,'" he said. Except, in retrospect, those songs gave him a foundation that was helpful later in his career.

On his new album, Peterson rocks out on "Big City," boosted by Oliver Leiber's guitar, and on the title track, buoyed by Eric Gales' guitar. However, that's Peterson himself contributing the tasty George Benson-ish guitar licks on "Another Glass of You." Other Minnesota players joined him, including brother Ricky Peterson, nephew Jason Peterson DeLaire and John Fields.