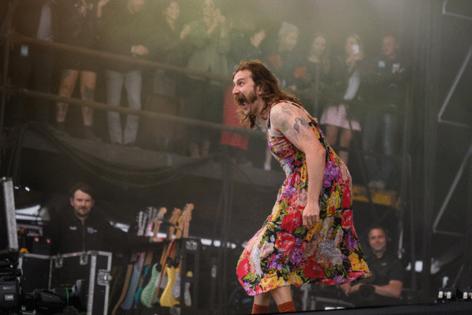 It’s been three years since the sounds of referential laughter and canned beers clinking filled the cars of the Great Western Railway trains transporting fans from London up to a field in Pilton, Somerset for Glastonbury Festival.

The performances taking place this weekend — headlined by Billie Eilish, Paul McCartney and Kendrick Lamar on Friday, Saturday and Sunday, respectively — weren’t those originally planned to commemorate the 50th year of the fest.

In those days, when COVID-19 was still just the peculiar coronavirus that most believed would stop punishing our world in a matter of weeks, Taylor Swift was supposed to headline along with Lamar and the former Beatle. Now, the 32-year-old “cardigan” singer — who dropped two hit albums mid-pandemic — is nowhere to be seen on the lineup.

Even so, the Pyramid Stage this weekend will be graced by plenty of icons, both those with well-established legacies like Robert Plant & Alison Krauss and Diana Ross — performing in the slot for Sunday’s Legends — and those still influencing young audiences in real time like Olivia Rodrigo, Lorde, Megan Thee Stallion and HAIM.

But for those traveling on a Friday morning, in the midst of a landmark rail strike, to get to Glasto, this signifies more than just a sprawling five-day concert for the ages. For Holly Parsons, attending the festival for the sixth time, her last experience there in 2017 might as well have been another lifetime.

“I guess it means a lot because everything changed so much since then. I mean the world’s changed, but I’ve just changed a lot too. I’ve married and had kids. I’m going back quite different to how I was five years ago,” Parsons, 34, told the Daily News aboard a train full of festivalgoers.

Getting to the festival is a journey of sorts — after arriving at the Castle Cary train station, people are shuttled off to the grounds. Or for those not braving the camping atmosphere, they catch a crowded bus from elsewhere, like the local Tesco, that at this inflated size bears a striking resemblance to Walmart, minus the soul-sucking fluorescent lighting.

As the bus pulls in, tents overtake the grass as far as the eye can see.

Libby Nash and Maria Torres are two such festivalgoers who prefer the convenience and cleanliness of their own toilet and bed to that of the communal options.