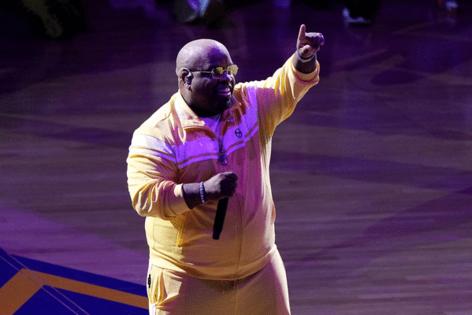 ATLANTA — CeeLo Green has thrived in different incarnations: as part of the legendary hip-hop group Goodie Mob, as part of the duo Gnarls Barkley and as a solo artist.

Now he is taking a different direction paying tribute to one of his heroes and fellow Georgian James Brown. He will be playing a mix of Brown classics and his own hits on upcoming tour dates.

Green has a clear memory of seeing Brown for the first time as a child on TV, rapt by the imagery. "He was still with The Famous Flames," he recalled in an interview with The Atlanta Journal-Constitution. "It was black and white. He was in a houndstooth vest. He had taken his jacket off. He was doing 'Night Train.' It was an excerpt from that performance. I was like, 'Wow!' I remember looking at his feet, his footwork. It was remarkable."

For decades afterwards, he has always admired the man, whose music has been widely sampled by many a hip-hop artist. "He's been omnipresent," he said. "I grew up as a kid in the 1980s and watching the subculture bubbling over ultimately becoming hip-hop. He basically fathered that."

Sadly, though Green had a chance to meet Brown just a few months before Brown died suddenly of a heart attack in 2006, it didn't happen. Green was performing with Gnarls Barkley in London during the height of "Crazy." Brown was in concert across town. He and his band were offered to stop by to say hello to Brown, but the timing didn't work given their own schedule. In retrospect, he regretted skipping it.

"I wished I had just jumped in a cab and gone myself," Green said. "Maybe I could have gone over there and kneeled at the helm of his garment so he could christen me or knight me."

Instead, he felt "super depleted" after Brown died.

Last fall, Green joined Paine College in Augusta as part of its Distinguished Artist in Residence program with a focus on recruiting and development. While there, he came up with this tribute idea. "Augusta felt so warm and inviting," he said. "It was surreal. Or it could have been 12 shots of Patron!"

He tested out the tribute show at the New Orleans Jazz & Heritage Festival this spring and thought it turned out well. "It was a lot of love and adoration," he said. "I take pride in my fanship. I want to make sure that bridge to the past is strong. I want to be the James Brown of my generation. But he'll always be soul brother number one."

Green said while performing Brown's tunes in New Orleans, he felt Brown's spirit in him. "I felt possessed," he said. "I felt it in my feet."

He said he doesn't remotely try to imitate Brown. It's simply an homage. "It's almost like a relationship with God," he said. "I just want to please the maker. I've been doing this for 27 years. It's very ironic how doing this music older than myself makes me feel younger."