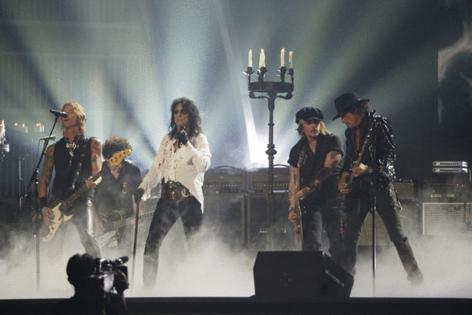 Weeks after his explosive defamation trial with ex-wife Amber Heard, the “Pirates of the Caribbean” star, 59, is going on tour with his superband Hollywood Vampires, the band announced Wednesday on Instagram.

“The Hollywood Vampires are BACK!! We’re coming to Germany and Luxembourg Summer 2023,” the band — which includes Depp, Alice Cooper, Aerosmith guitarist Joe Perry and Alice Cooper guitarist Tommy Henriksen — captioned a poster of their tour dates.

The foursome is slated to perform in Germany at the end of June 2023 — including Oberhausen, Munich, Hamburg, Berlin and Mainz. Between their Oberhausen and Munich shows, they’re scheduled to perform in Esch-sur-Alzette, Luxembourg.

The announcement comes just weeks after the verdicts were issued in Depp and ex-wife Amber Heard’s defamation trial, which took place in Virginia.

The former sued the “Aquaman” actress, 36, for $50 million for defamation in relation to the 2018 Washington Post op-ed in which she identified herself as “a public figure representing domestic abuse.” Depp said the piece was clearly a nod to the abuse allegations she’d leveled against him, despite never being explicitly named in the piece. Heard countersued Depp for $100 million due to his former lawyer dubbing her accusations a “hoax.”

Heard last week elaborated on her position in a two-part interview with the “Today” show.

“To my dying day, I will stand by every word of my testimony,” she told Savannah Guthrie.

The interview also featured as the centerpiece for last Friday’s airing of “Dateline.”