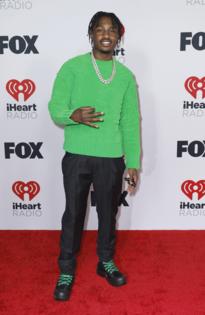 In an early-morning tweet, the Bergen County prosecutor's office said that its major crimes unit and the Edgewater Police Department are investigating a shooting with two victims that occurred around midnight Wednesday at 14 The Promenade, a shopping plaza in Edgewater.

TMZ reported Wednesday that one of the victims was the 21-year-old rapper and that he was undergoing surgery. The extent of his wounds and his condition were not yet known.

Representatives for the rapper, whose given name is Tione Jayden Merritt, and for the prosecutor's office did not immediately respond Wednesday to The Times' requests for comment.

The shooting reportedly occurred in two places, at a Chipotle restaurant at 14 The Promenade and at a nearby Exxon gas station, TMZ said.

Just before the shooting, the "Goin' Up" and "Destined 2 Win" musician posted a "PSA" on his Instagram Stories that said: "Just because you've been around a person doesn't make you entitled to the fruits of that persons labor. Envy Is At An All Time High Be Safe Outchea"

On TikTok this week, the rapper shared a snippet of his upcoming single "Stressed" and asked followers when he should drop it.