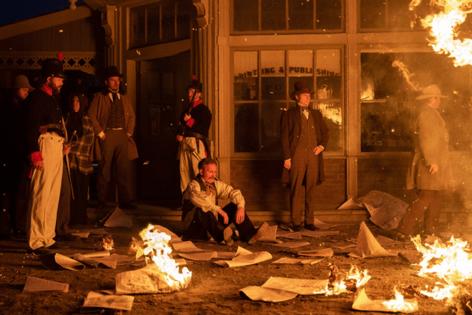 "Under the Banner of Heaven" is more than just a true crime detective story. It's also a period piece tracing the history of the Church of Jesus Christ of Latter-day Saints and the journey of its founding prophet, Joseph Smith.

As Detective Jeb Pyre (Andrew Garfield) investigates the brutal 1984 killings of Brenda Lafferty (Daisy Edgar-Jones) and her infant daughter, "One Mighty and Strong," the series' fifth episode, flashes back to a defining moment for Latter-day Saints: the murder of Smith and his brother, Hyrum, in Carthage, Illinois, in 1844.

Smith and a growing legion of followers had pushed across the country, eventually settling in Nauvoo, Illinois, in 1839 after fleeing Ohio and a violent expulsion from Missouri.

But in Illinois, Smith was arrested for inciting a riot after he endorsed the destruction of the printing presses belonging to a dissident newspaper that had criticized Smith for plural marriage and other controversial doctrines.

Smith and his brother had been taken into custody at the Carthage Jail to await trial when they were attacked by a frenzied mob. Hyrum was killed as he tried to block the door; Joseph was then shot multiple times before he plummeted out the window.

"This is a story that every young Mormon learns," said series creator and showrunner Dustin Lance Black, who was raised in the Church of Jesus Christ of Latter-day Saints. The familiarity of this saga in church history made re-creating it in 21st-century Canada especially daunting.

"The challenges with the historical work were threefold," said production designer Renee Read. "Weather was not our friend. We had a lengthy timeline, and [the series' historical action] span[s] a lot of decades. And it's very recent history, so it's well documented and part of the collective consciousness, meaning there's not a lot of wiggle room" to take poetic license, she added.

For starters, Smith's murder, which took place on a sunny day in June, was "filmed in late November in the southern plains of the Canadian Arctic climate," said Read. This meant the production had to get rid of the snow blanketing the ground. Read and the show's cinematographer would fly overhead in a helicopter to identify the areas that needed clearing.

The production also contacted oil rigs in northern Alberta in order to track down specially designed dry steam trucks that would work in colder weather. ("We accidentally turned our entire Nauvoo town into a skating rink the day before" using a wet steam truck, Read said.)

Because the red limestone jail, built in 1839, is such a readily identifiable landmark, Read did not have the option of repurposing a set from another production.