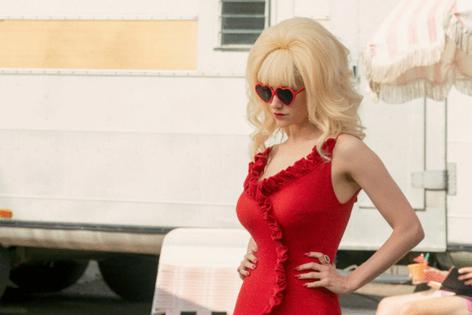 In the charming 1954 comedy "It Should Happen to You," Judy Holliday plays Gladys Glover, who, seeking fame, rents herself a billboard overlooking New York's Columbus Circle, proclaiming her name. When a soap company wants the space, she trades for six other billboards, which creates a civic mystery, which leads to celebrity.

In a real-life remake of this film, set in L.A. a few decades later, a woman followed a similar playbook, to similar ends. And now, as these things happen, her story, hung on a pair of Hollywood Reporter pieces by Gary Baum, has been converted back into docudramatic fiction with Peacock's miniseries "Angelyne." (It includes a variation on that billboard trading scene.) Where Holliday's character ultimately decides that being known for being known is not as fulfilling as she had imagined, Angelyne, still a local presence — a mirage, almost — in her pink Corvette, has continued to wave that flag into senior citizenship.

Created by Nancy Oliver, with Allison Miller as showrunner and directed largely by Lucy Tcherniak, "Angelyne" stars Emmy Rossum in a role the actor optioned the material to play. The Angelyne phenomenon surely needs extra explanation outside Los Angeles, but audiences will often flock to something they're assured is based on a true story, however much they know about it in advance. And Rossum fans will be interested.

The annals of show business are rife with changed names and invented pasts, regularly cooked up by movie studio publicists. Then there were those who took it upon themselves. Blond Marilyn Monroe was brunet Norma Jean Baker. The history Bob Dylan (ne Robert Zimmerman) invented for himself is enshrined in early album notes. Andy Warhol(a) rarely gave a straight answer to a serious question. But they didn't go to great lengths to hide where they came from, either. And, of course, they were Monroe, Dylan, Warhol. The Angelyne billboards seemed to promise something at first, but they were only ever billboards.

There has been little evidence across five decades, notwithstanding a handful of recordings and film cameos, that Angelyne is any good at anything besides being Angelyne. She is a strangely successful version of a Hollywood failure. "I don't want to be famous for something that I do," miniseries Angelyne tells Harold Wallach (Martin Freeman), the series' version of the printing business owner who backed her billboard campaign, after a humiliating audition. "I want to be famous for who I am."

The question of Who Is Angelyne presents certain challenges, given her insistence that the remade model is her true self, however it might diverge from the person she grew up as — revealed in Baum's second Angelyne article in 2017, negating in the process some of the things she'd made up in the first. (As it's the closest thing the series has to a revelation, I won't print it here, other than to say I was reminded of another movie, "Breakfast at Tiffany's.")

Angelyne indisputably has her fans, but "Angelyne" overestimates her cultural effect. It's true that many know her name, because it was plastered all over town for years, and many are familiar with her signature Corvette. But the knowledge (and I dare say interest) usually stops there. As related in the miniseries, this is partly by design: Angelyne has striven to remain a mystery. "I'm a Rorschach test in pink… ooh!," she says, in one of many lines of dialogue farmed from Baum's first Angelyne piece, a standard feature from 2015. (Baum is called Jeff Glaser here, and played by Alex Karpovsky — all the characters' names have been changed, including Angelyne's real one.) "People see what they see."

Upon this pink blank slate has been variously written a one-woman precursor to Twitter, the model for Paris Hilton and Kim Kardashian (though not the first person to be famous for nothing), a work of performance art, the ultimate expression of a fame-obsessed culture. Or a woman in control of her body, her image, her intellectual property, her career, her life (which, in this case, all amount to the same thing). One scene has her speaking truth to Hugh Hefner, over using nude photos of Monroe without her consent.

That control seems not to have extended to "Angelyne," the greatest instrument of cultural validation Angelyne may expect to receive in this timeline. She was on board as an executive producer for a while, then walked away. One can see why this might be case. The series, to its credit, does not merely picture the fantastic bubble in which its subject lives — there is plenty of that, including a Busby Berkeley-style fantasy sequence — but it also punctures it with alternative views and established facts. Though a good deal of it is clearly invented — changing the names of your characters does give you a certain license in that regard — and while it is on balance a celebration (otherwise, what would be the point?), there is a respectable attempt to express the essential, if not always the actual, truth of the matter.

The effect is a little schizoid, however, and it's hard to know how to take the series at first, what's meant to be funny ha-ha and what's meant to be funny strange. This is not just as concerns the star, a character half-defined by self-knowledge and half self-delusion, but of most of the other main characters, including Freeman's printer, Hamish Linklater as her fan club president and right hand, Charlie Rowe as her house photographer and Lukas Gage as a young man trying to make a documentary about her, though not the "documentary" we seem to be seeing. Some are caricatures, some not.