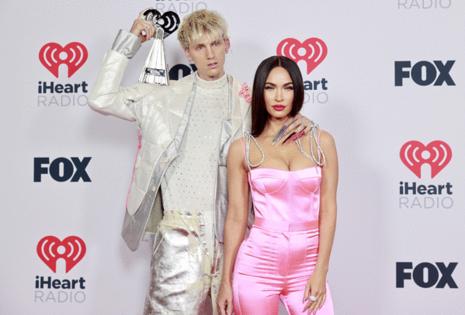 Megan Fox and Machine Gun Kelly have confirmed that they're vampires — er, I mean, engaged.

Wednesday afternoon, Fox claimed via Instagram that she and Kelly drank each other's blood after the rapper proposed and she said yes earlier this week. Because of course they did.

"In July of 2020 we sat under this banyan tree. We asked for magic," Fox captioned a video of Kelly getting down on one knee beneath said banyan tree on the grand steps of a mansion.

"We were oblivious to the pain we would face together in such a short, frenetic period of time. Unaware of the work and sacrifices the relationship would require from us but intoxicated off of the love. And the karma."

The high-profile celebrity couple first sparked dating rumors in May 2020 after filming the crime drama "Midnight in the Switchgrass" in Puerto Rico. In a buzzy GQ feature, the lovebirds later clarified they actually met a few years prior at a party in Los Angeles, where Fox told Kelly, "You smell like weed," and Kelly famously uttered the romantic phrase, "I am weed."

"Somehow a year and a half later, having walked through hell together, and having laughed more than I ever imagined possible, he asked me to marry him," Fox continued in her post.

Not to be outdone, Kelly also shared a video of his fiancée's engagement ring — comprising a pair of clear and green gemstones — shimmering in the light.

"beneath the same branches we fell in love under, i brought her back to ask her to marry me," the "Bloody Valentine" hitmaker wrote.

"i know tradition is one ring, but i designed it with Stephen Webster to be two: the emerald (her birth stone) and the diamond (my birth stone) set on two magnetic bands of thorns that draw together as two halves of the same soul forming the obscure heart that is our love."

The recording artist and the "Transformers" star went public with their relationship in summer 2020 and haven't looked back, consistently making headlines and expressing their undying (undead?) affection for each other via awards-show appearances, joint interviews, steamy photo shoots and off-the-wall social media posts.

Fox was previously married to fellow actor Brian Austin Green, with whom she shares three children. They finalized their divorce last year after raising eyebrows with a side eye-inducing social media exchange involving Kelly.

Since announcing their engagement, Fox and Kelly have received a number of congratulatory messages on social media from the likes of Kim Kardashian, Kourtney Kardashian, Travis Barker, Avril Lavigne and others.