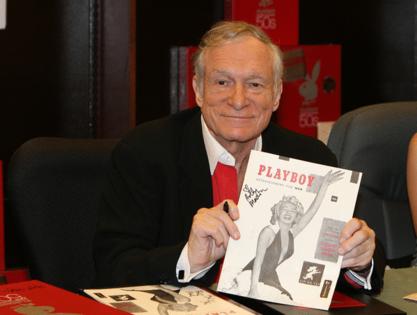 Next month will bring the debut of “Secrets of Playboy,” a 10-hour series on A&E featuring players from “all levels of the brand,”the cable network said in a release Tuesday. Among those doing the talking? Former Playboy bunny and Hefner’s one-time girlfriend Holly Madison.

“Hefner defined the sexual revolution and allowed for the freedom of sexual expression,” A&E said in its release. “Yet intertwined with the glossy facade of a world that seemingly celebrated women was a more sinister reality that for decades allowed nefarious conduct including sexual assault and drug abuse to flourish, and where prostitution, suicide and even murder lurked in the shadows.”

Madison, who starred in E!'s “Girls Next Door” with Bridget Marquardt and Kendra Wilkinson and lived in the Playboy Mansion during her 2001-08 stint as one of Hef’s girlfriends, describes a very stressful time where she was harangued by the man of the house.

“I remember there were times, probably within the first couple of years that I lived there, where I felt like I was in this cycle of gross things and I didn’t know what to do,” Madison says in a promo video. She describes pressure to “look like everyone else” and says that the one time she cut off her long hair, Hefner lost it.

“He flipped out on me and he was screaming at me and said it made me look old, hard and cheap,” she said.

Marquardt remembers that period too, sharing details such as Hefner’s seemingly random red-lipstick ban for Madison.

“It was very frustrating to live with every day, all of the drama that was going on and the tensions,” she said in the promo. “I could definitely see that she was getting depressed and sad and her demeanor was starting to change.”

Madison previously wrote in her 2015 tell-all book, “Down the Rabbit Hole,” that she had contemplated suicide during her time at the mansion.

In the book, she explained her decision to move into the mansion: “I felt stuck in my life, trying to make ends meet. I lost the lease on my apartment. I felt like I’d already thrown myself to the wolves, so I might as well reap the rewards and not just be one more slut who walked through those doors.”