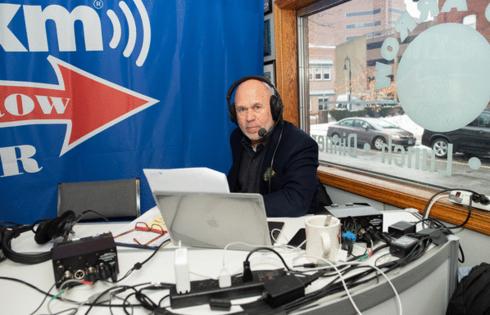 A familiar Philadelphia voice will fill in for Chris Cuomo this week after the anchor’s firing by CNN.

Michael Smerconish, the onetime Philadelphia radio host and a former Philadelphia Inquirer columnist, will fill in for Cuomo all week at 9 p.m. ET, according to a CNN spokesperson. Nothing has been determined beyond Friday.

“I don’t take any pleasure in it,” Smerconish said during his SiriusXM show Monday. “I’m not celebrating anything. … The entire saga is sad on many levels. I consider Chris to be a friend of mine.”

“I have a job to do, and I’ll do it for a couple of nights, and then I will go home and I will resume my very normal life,” Smerconish added. “I’m heartbroken for everyone involved in this whole situation. … It’s just uncomfortable and I want to do right by everybody.”

CNN announced it fired Cuomo on Saturday, after the network hired an outside law firm to review documents related to how he helped his brother, former New York Gov. Andrew Cuomo, after accusations of sexual harassment. CNN had suspended Chris Cuomo last Tuesday, and said in a statement “additional information has come to light,” leading to his immediate termination.

The New York Times reported that lawyer Debra Katz notified CNN last week that a former junior colleague at another network made “an allegation of sexual misconduct” against Chris Cuomo that was “unrelated to the Gov. Andrew Cuomo matter.” It’s unclear what role the allegation played in CNN’s decision to part ways with Chris Cuomo, but Katz said in a statement that “CNN acted promptly on my client’s complaint and fired Mr. Cuomo.”

A spokesperson for Chris Cuomo told the Associated Press the allegations were untrue.

“If the goal in making these false and unvetted accusations was to see Mr. Cuomo punished by CNN, that may explain his unwarranted termination,” the spokesperson said.

Shelley Ross, a former executive producer at ABC and CBS, wrote an opinion piece published in September by the New York Times claiming that Chris Cuomo sexually harassed her by grabbing her inappropriately at a going-away party for an unnamed ABC colleague. As part of the piece, Ross shared an email the anchor sent her after the incident in which Chris Cuomo wrote he was “ashamed” and apologized “for even putting you in such a position.”

Smerconish, a Doylestown, Pennsylvania, native, is no stranger to CNN viewers. The longtime Philadelphia voice hosts his own show on the network Saturday mornings. Smerconish tried out for CNN’s 9 p.m. slot in 2014 following the departure of Piers Morgan, and has filled in when Cuomo was on vacation.

Smerconish joined CNN in 2014 after several years as a contributor and fill-in host at MSNBC. The veteran radio voice, who spent years locally on 1210 WPHT, has also hosted a daily talk show on SiriusXM since 2013. Last year, he celebrated his 30th anniversary as a talk-radio host with a special on CNN titled "Things I Wish I Knew Before I Started Talking."

“The 30 years that I have been involved in the business tracks, almost exactly, with the rise of a polarized media,” Smerconish told The Inquirer last year. “Every talk-radio station in the country used to be a reflection of the local market. When I got started, there was no syndication to speak of. And the rise of Rush Limbaugh in the early ‘90s changed the whole dynamic.”

Before that, Smerconish worked on the political campaigns of former Sen. Arlen Specter, R-Pa., and former Philadelphia Mayor Frank Rizzo’s failed election bid as a Republican in 1987, and served as a regional administrator for Philadelphia in the Department of Housing and Urban Development under former President George H.W. Bush.

The 9 p.m. time slot is important for CNN, as it competes with opinion hosts Sean Hannity on Fox News and Rachel Maddow on MSNBC. Though Cuomo’s show was often the most-viewed on CNN, he consistently finished behind Fox News and MSNBC. According to Nielsen numbers reported by The Wrap, Cuomo’s show averaged 774,000 viewers in November, while Hannity averaged 3.23 million and Maddow averaged 1.98 million.