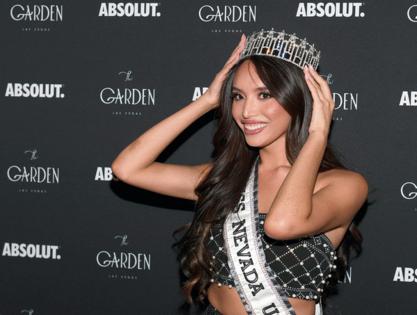 In an interview published Wednesday by Yahoo Life, the health care administrator and fashion designer opened up about her experience vying for the coveted Miss USA crown after she failed Monday to advance to the final 16 in the Tulsa, Oklahoma, tournament.

The title ended up going Tuesday to Elle Smith, a TV news reporter from Kentucky.

“It was an honor just to be able to represent my community and be an example for young queer children who now know they don’t need to be limited by society’s standards,” Enriquez told Yahoo.

Enriquez made history in June when she became the first openly trans winner of the Miss Nevada pageant. After she didn’t place in the national contest, the model told Yahoo she was “shocked” and “disappointed.”

“I worked so hard for it,” she said. “I think they were just not ready.”

On Wednesday, the trailblazing beauty queen shared a glamorous group photo from the event and reminisced on Instagram about her Miss USA journey.

“Going into the competition, I was prepared to face issues and conflicts because of our political climate and divide,” Enriquez wrote. “I went in with pre-judgement of beliefs and attitude according to your state and I am so thankful that I was wrong. To every women who approached me with welcomeness and those who took time to understand me, thank you.”

While fulfilling press duties during her Miss Nevada tenure, Enriquez consistently used her platform to empower others from marginalized communities and share her own success story. Before she was a state beauty queen, Enriquez got her start in fashion design by sewing her own dresses because she couldn’t find any that fit her body or budget.

“Thank you for giving me a chance to show you, and show the world another side of the story that isn’t often told correctly,” she continued on Instagram.

“To every person who ever felt invisible or denied the chance to be their best self, this is for you. I am a living breathing example of what was impossible. Do not let expectations and socio standards stop you from living your truth and chasing your dreams.”