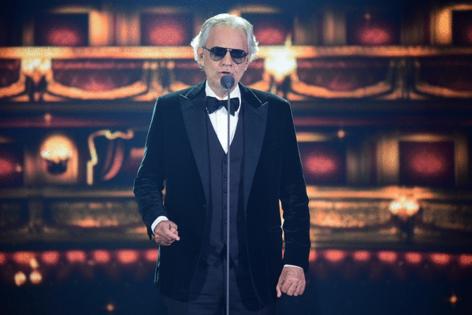 One of the world's best-renowned Italian tenors, his discography and touring performances regularly cross boundaries between pop and classical music to great acclaim. In an email interview with the aid of a translator, he acknowledged that classical and pop music exist in "two distinct universes; each with its own difficulties, artistic depth and dignity," and he said that he proposes to introduce pop listeners to certain operatic works in the hope of spreading awareness.

Some classical aficionados take issue with his technique, but this is shortsighted — Bocelli's voice has a signature warmth that continues to uplift millions of listeners regardless of genre. On Easter Sunday of 2020, for example, a YouTube livestream shattered records with nearly 3 million concurrent viewers, one of the most-watched musical livestreams in history.

Currently, Bocelli is in the midst of a tour promoting his latest album, "Believe."

Prior to his arrival for Pittsburgh's Dec. 4 show, he discussed his return to live performance, the new album's aesthetic and his preference for performing in America vs. Europe.

Q: How did you arrive at the musical aesthetic for the new album? Is it all COVID-related or something else as well? It sounds gentle, healing, optimistic to me — is that a fair characterization?

A: The first lockdown basically accelerated a recording project that I had already been thinking about for some time. After a number of albums in which the main fil rouge was sensuality, I felt the need to realize a project dedicated to the spirit. In doing so, I proposed my contribution to what I believe to be an ever-compelling need, and that is, the will to rediscover one's own internal dimension.

Q: Can you explain how the album accomplishes this?

A: I like to think of this album as a sort of healing tonic; a series of sung prayers that can also provide relief and trigger optimism. ... The project hinges on three concepts, the first of which is faith. Together with hope and charity, these make up the three theological virtues: the fundaments of Christian action, as well as three universal ethical principles. "Believe" represents my will to offer a selection of songs that can be — regardless of one's religious beliefs — a moment of serenity, of introspection and beauty.

Q: You recorded this album during a period of lockdown, a more intimate experience than a live performance. How does the energy of an arena affect what seems like a very personal album conception in terms of tempo and balance and performance practice?

A: Having an audience, no doubt, makes a difference: on stage, it's as if the artist is able to heighten his or her sensitivity; capture the mood of the audience, their level of attention, of engagement. ... In the recording studio, you can work on subtleties that give polish and perfection to the score. What you lose, at times, however, is the spontaneity that, conversely, live performances make possible. In terms of tempo, subjective expressions are much more limited in the operatic and general classic repertory than in the pop music world. But it is also true that no performance is ever the same: the variations of rhythm are actually the very essence of an interpretation... And that impalpable energy that flows between the audience and the stage has a crucial role in determining the efficacy of these variations.

Q: Classical music audiences in Europe are typically much more enthusiastic than their U.S. counterparts. I'm curious, does your music inspire different reactions in Europe and the U.S.?

A: I love Italy and my fellow Italian nationals. I feel that I am an all-around European citizen, but, as I have mentioned often throughout the years, I make no secret about my preference for the American public. Sometimes, in the old Continent, a certain kind of opera house audience struggles to let itself go, whereas the American audience, I believe, still knows how to get emotional, participating actively, generously, and "living" the concert for the sheer pleasure of sharing the powerful emotions that come with listening.

Q: Some have described your music as "crossover." Can you share your thoughts on the term and whether it's an accurate description of your aesthetic?

A: I need to premise this with the fact that I am not particularly fond of dwelling on definitions and labels. Even more so, considering that it is not something germane to my line of work, rather to that of music theorists. I find the term "crossover" to be somewhat ambiguous, which is something I don't recognize myself as being.

I do, nonetheless, perfectly understand why such a term would be applied to an artist like me, who, despite not "mixing" genres, loves to bring opera into the arenas, proposing classic pieces to an audience unaccustomed to this type of repertory. I do need to point out that it is my conviction that classical and pop music belong to two distinct universes; each with its own difficulties, artistic depth and dignity. I often propose, in a context devoted to pop, some operatic pieces, in the hope of spreading awareness of it, to disseminate my predilections. The challenge is always to continue to promote and advocate for quality, whatever the genre.

MINNEAPOLIS — "Welcome to Flatch," a Fox sitcom debuting in March, takes place in a fictional small town in Ohio. But the promising half-hour comedy has some strong Minnesota connections.

As I look forward to the next installment of "And Just Like That...," HBO's 10-episode sequel to "Sex and the City," I'm finally over the initial shock of Big's death.