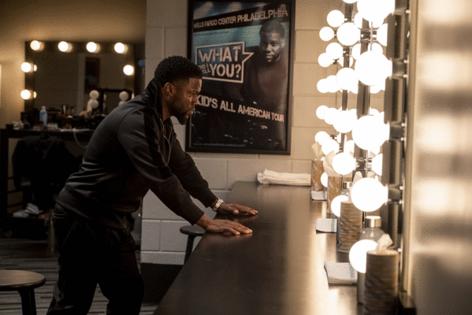 When you’re a star as big as Kevin Hart, people will speculate about your life. And social media has made it that much easier to hold our favorite celebrities up to the light, looking for cracks, and wondering about this rumor or that. “True Story,” Hart’s new drama series (yes, drama) for Netflix, feels like a sly response to that.

You want to speculate? OK, he seems to be saying, let’s speculate: Here’s what it might look like if a guy with a career a lot like mine found himself in a situation so dangerous and felonious, it could ruin his life if it ever became public. It doesn’t matter that someone else set this nightmare in motion. He’s right there in the thick of it, hands dirty, conscience maybe troubled.

Hart’s character doesn’t have a name. He’s simply called Kid, or the Kid, which belies the very adult crimes in his immediate future. A recently divorced father who is six months sober, he’s riding high on a billion-dollar superhero franchise when he rolls into his hometown of Philadelphia to play a series of arena shows on his stand-up tour. Despite being surrounded by a small, exasperated entourage — Paul Adelstein as his manager, Tawny Newsome as his joke writer and Will Catlett as his bodyguard and driver — who are doing everything they can to keep the Kid happy, a toxic familial bond in the form of an older brother (played by an outstanding Wesley Snipes) pulls him down into the muck.

The Kid may not be a guy who seeks out trouble, but when it arrives on his doorstep his response to it is ugly and amoral. What a premise! I mean that sincerely. In Hollywood and on gossip sites alike, whispers about this person or that are a constant and sometimes not entirely off base, and there’s something brilliant about the idea of Hart — who has had controversies of his own — steering into the skid. He might as well be asking: You think that’s bad? Let me show you how bad people in this ridiculously rarefied world can be. The decision to title this project “True Story” is yet another zinger in that direction.

Too bad the series, created by Eric Newman (“Narcos”), is less inspired than the idea behind it. A dead body turns up. That leads to more dead bodies. Some of those bodies need disposing. (Netflix has listed every plot point as a spoiler, hence my vagueness.) None of this is played for laughs. Instead it’s a dark, sometimes fascinating depiction of the way stars of this caliber do all kinds of promotional appearances with smiles plastered on their faces while their real lives are falling apart, and no one’s the wiser. Things aren’t always what they seem. Celebrity is an act.

“True Story” is extremely violent in sections. It’s brutal and grim but not gratuitous exactly; whether its savage beatings or a garroting by phone charging cord, there’s no one to root for in these scenes — that’s the point of all this graphic explicitness, I think. But it’s a point made repeatedly and it becomes so off-putting that it looses any real meaning.

More intriguingly, the seven episodes of “True Story” are a study in the domino effect. Once there’s a cover-up, you’re stuck telling lie after lie in order to keep the subterfuge going. Since the dawn of cinema, Hollywood has had systems in place to protect its stars from real-world consequences, but the Kid does not avail himself of this loophole, suggesting there are different nuances at play when a Black man — even a wealthy, beloved, world famous Black man — is the one in the crosshairs. It feels believable that he wouldn’t trust even an off-the-books system that’s only accessible to the rich and famous. Instead, he handles things on his own.

Well, not quite alone. His older brother Carlton (Snipes) matches him step for step. “True Story” is strongest when it centers on this tangled repulsion-attraction brotherly dynamic. A schemer with a trail of failed businesses behind him, Carlton is a likable if disruptive presence who is, deep down, angry and resentful of the Kid’s success, but all too happy to enjoy the spoils of his brother’s fame. There is real love and a sense of loyalty at the core of their relationship (that we see or hear nothing about the rest of their family suggests these two are all they have) and it wouldn’t work half as well without Snipes’ complicated, layered approach. He feels like a real person. (When the Kid’s manager knocks on Carlton’s door, bearing coffees and a request to talk, the look of supreme annoyance on Snipes’ face is a thing of beauty.) Hart plays the Kid’s desperation as sweaty and erratic, thrumming with panic, whereas Snipes give’s Carlton a loose-limbed cool facade that barely masks his sour inner turmoil. They’re both recognizably human. And they’re both treacherous when push comes to shove. Snipes’ work here is what keeps it interesting.

A pair of Greek gangsters complicate matters further (the less said about them the better; there’s nothing compelling about this storyline or the performances), as does a superfan/stalker played with unsettling sincerity by Theo Rossi. And then there’s the smooth-talking “cleaner,” a brilliantly subtle turn by Billy Zane. He’s blunt but soft-spoken and weirdly jokey — the kind of man who radiates a casual self-confidence that sets your teeth on edge. As light as he’s keeping it, things can turn heavy in an instant.

Despite what “True Story” has going for it, it ultimately lacks any depth beyond what Snipes is bringing to it. There’s a nasty line that someone delivers with a shrug: “Girls like this disappear all the time and no one comes looking.” The show isn’t interested in jabbing back at that kind of misogynistic callousness or even probing it. Instead, it simply puts a spotlight on it, as if there’s meaning in mere depiction. It’s conspicuous that the show avoids going all in on the corrupting influences of the celebrity-industrial complex and the specific ways it traffics in a cover-up economy.

That proved to be an advantage, says ...Read More