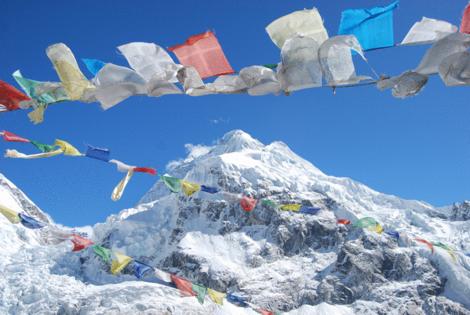 There are a number of times during "The Summit of the Gods" that you can't help but wonder "Why?" Why are these mountaineers driven to attempt increasingly dangerous challenges to reach summits in altitudes their bodies aren't meant to survive in?

The answer is just one of the things Japanese photojournalist Makoto Fukamachi (voiced by Damien Boisseau) seems to be chasing in this animated feature directed by Patrick Imbert. Written by Imbert, Magali Pouzol and Jean-Charles Ostorero, "The Summit of the Gods" — based on the manga by Jiro Taniguchi and Baku Yumemakura — follows Fukamachi on his quest to track down outcast climber Joji Habu (Eric Herson-Macarel), who he believes holds key evidence that could answer one of Mount Everest's greatest mysteries.

The characters are fictional, but their story is grounded in kernels of truth. Although the first officially documented summit of Mount Everest was accomplished by Tenzing Norgay and Edmund Hillary in 1953, the success of a 1924 attempt by George Mallory and Andrew Irvine remains a matter of debate because the pair never returned. Fukamachi believes Habu, who has been missing from the climbing scene for years, possesses the camera Mallory carried during this expedition and may hold images that can finally reveal what happened.

This set-up allows the gorgeously animated "Summit of the Gods" to approach Habu's passion for mountain climbing in a more accessible way. Habu is a singularly focused mountaineer, and his drive has not only isolated him but has also brought brushes with adversity and tragedy. Devotion to such a deadly sport is not always relatable, and in that sense, he can be read as someone cut from a similar cloth as Captain Ahab.

The film's beautifully painted mountains are particularly striking, and the climbing sequences are among its standouts. Live-action has nothing on the way these scenes convey both the majestic scale of the peaks and the technical skill necessary to attempt these summits (as well as the physical toll involved). The quiet, sublime moments the film captures as it pans over facets of the imposing Everest also offer a clue into why these mountaineers might be drawn to climbing without downplaying the danger involved.

"The Summit of the Gods" initially jumps between two timelines: Fukamachi's present in the 1990s as he investigates Habu's story and possible whereabouts, and the elusive mountaineer's past. Fukamachi's obsession around uncovering the truth of Habu and Mallory's stories comes to mirror Habu's obsession with chasing ever more challenging climbs.

It's through this parallel that it becomes apparent that "The Summit of the Gods" is not necessarily concerned with explaining or justifying any particular passion. Because sometimes why we are drawn to certain things is less significant than what we do about it.

‘THE SUMMIT OF THE GODS’

Where to watch: Now playing in theaters and streaming on Netflix Nov. 30