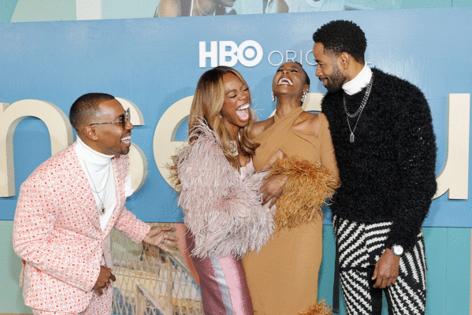 The plea for HBO's comedy to adopt a longer runtime has become a recurring gag that Prentice Penny, the series' showrunner, has had to contend with — often playfully — over its five seasons. Much to his confusion.

"I just responded to someone today about it," Penny says with a laugh. "It's a half-hour comedy! Nobody goes: 'Oh, man, how come 'Malcolm in the Middle' wasn't an hour?' You might call 'Succession' an hourlong comedy because it's hilarious in the best way; there's a ton of jokes in that show. But, no, no hour from us. It's so dope that people love our show like that. But there's a line between 'I wish this show was an hour in Season 1' and then still saying it in Season 5."

After making its debut in September 2016, "Insecure" transformed creator and star Issa Rae from a YouTube sensation, known for her web series "The Misadventures of Awkward Black Girl," into an in-demand A-lister. Now, with the series having begun its final 10-episode arc on Sunday, it carries a notable legacy: The first premium cable scripted series created by and starring a Black woman, "Insecure" has been revolutionary in the way it depicts a slice of Black life that mirrors the humanity, complexity, sexiness and, yes, awkwardness that's afforded to shows centered on youthful white casts.

Penny has been a guiding force of that vision from the start. He wrote a letter to Rae, who also grew up in L.A.'s Windsor Hills neighborhood, after reading the pilot. He wanted to take the lessons he learned from the UPN-turned-CW sitcom "Girlfriends," where he got his start, and pass them on.

He has spent much of this final stretch looking back. Over the summer, as production wound down, Penny posted throwback images from the show's beginnings on his Instagram account — old headshots of the cast, an image capturing the first shot outside the Dunes apartment complex. It's in keeping with the show, which opens its final season with Issa and Molly, besties in a slump, attending their 10-year college reunion at Stanford University and trying to find their way back to each other over a weekend of reminiscing. (More on that later.) But nostalgia hasn't changed Penny's mind about the decision to end the show now.

"I don't know if you can watch eight seasons of Issa, like, falling down and walking into walls and s— like that, not getting her life together," Penny says. "At a certain point, you're like, 'Girl, come on.' I just think that the DNA of this show holds a certain amount of things that it can carry, and it shouldn't carry more than that."

From his home office in Los Angeles, where a collage of Rat Pack images line his wall, the 46-year-old producer spoke over Zoom about "Insecure's" legacy, dealing with awards "bull—," and the Issa and Molly conundrum.

—The friendship between Issa Dee and Molly Carter, played by Rae and Yvonne Orji, has been the linchpin in "Insecure's" exploration of adulthood. In the show's fourth season, their friendship was tested, with the two seemingly drifting apart as they each contend with new phases in their lives.